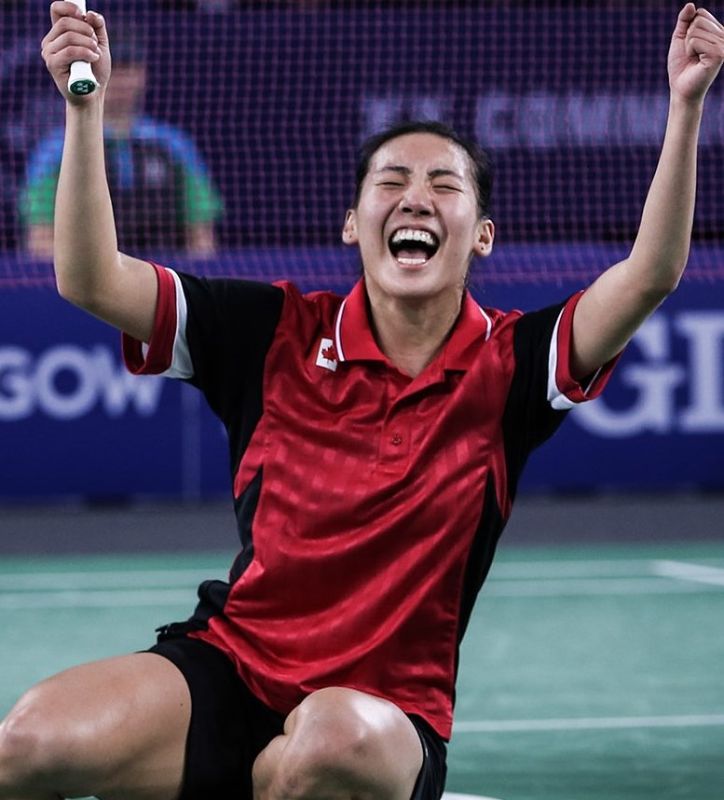 Gilmour, clearly overwhelmed by the avalanche of expectation and support from a very partisan crowd inside Emirates Arena for the finals, succumbed to a combination of pressure and 23-year-old Li’s impressive all-court guile and skill. The 20-year-old tried her best but she was never allowed to get into the match; the 21-14 21-7 result an appropriate reflection of Li’s superiority. Men’s Singles: A different side of Kashyap Parupalli (below; left) came to the fore as the determined Indian edged Singapore’s Derek Wong for the Men’s Singles title. Securing match point with a drop shot, the new champion leapt into the air, ripped off his shirt and roared like the king of the jungle. The 27-year-old then rushed into the open arms of his coaches.

The relief and delight were evident as a broad smile stretched across the face of this player who usually appears a subdued and quiet personality. While the tight 21-14 11-21 21-19 victory was his, he knew well the tense battle, which featured many ebbs and flows, could have gone either way.

Having seized the early ascendancy, he lost focus as Wong became more assertive to force a decisive third game. At 12-8 ahead, Wong appeared on course to etch a historic milestone for Singapore but Parupalli pulled himself together just in time and – despite a late surge from 16-19 down to 19-19 by Wong – eked out the last two points.

Mixed Doubles: Chris and Gabrielle Adcock became the first husband-and-wife pair to savour Commonwealth Games gold in badminton with a dominant display versus their England team-mates, Chris Langridge and Heather Olver, in the day’s first final. They cruised to the championship with an efficient 21-9 21-12 win.

Reacting to their success, a jubilant Mrs Adcock told BADMINTON England: “We can’t believe it, no words can explain it. It’s all the hard work that we’ve put in; this is the reward! We are just so happy that we got that gold. The last two years have been the biggest roller coaster I’ve ever been on – the highs and lows – but that’s sport, and then we step on that podium (and) it all feels worth it.” Women’s Doubles: A shell-shocked Jwala Gutta and Ashwini Ponnappa could hardly believe they plummeted to defeat in straight games, wasting five game points that would have forced a third game against Malaysia’s Vivian Hoo and Woon Khe Wei. The defending champions, hoping to repeat their golden feat of 2010 on home turf in Delhi, were 20-16 ahead but couldn’t find that elusive last point in the second game.

Great defence and anticipation at net kept Hoo/Woon in with a chance and they fought back to 20-20, withstood another game point, and then closed out the match for a superb 21-17 23-21 triumph. Men’s Doubles: Not to be outdone by their female peers and keeping their national legacy intact, Malaysia’s blossoming pair of Tan Wee Kiong and Goh V Shem wrested the gold medal, 21-12 12-21 21-15, to celebrate their country’s seventh consecutive Commonwealth Games Men’s Doubles title. In doing so, they condemned Singapore – represented by Danny Chrisnanta and Chayut Triyachart – to a second defeat in today’s finals.

Having cruised through the opening game in 11 minutes, with Goh hammering his trademark smashes from the back and Tan alert at net, the eventual winners seemed to lose concentration in the second game while their rivals responded swiftly to even the score. However, the Malaysians shook off that momentary setback and proceeded to their date with destiny.