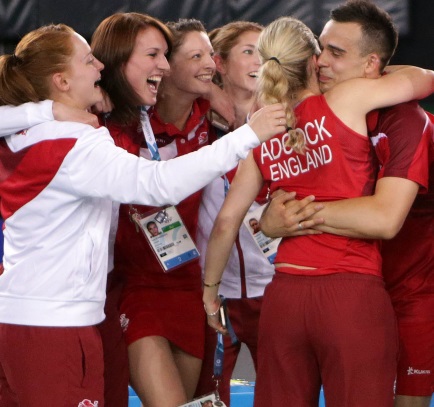 It will be a showdown between past and current champions for the Mixed Team title of the 2014 Commonwealth Games.

In the semi-finals yesterday, defending titlists Malaysia scraped past a doughty Singapore side 3-2 to stay in line for a hat-trick of titles, while four-time champions England had it surprisingly easy over India (3-0).

Singapore nearly stole the show over favourites Malaysia. The opening Men’s Doubles match was an indicator of the closeness of the tie. In-form pair Tan Wee Kiong/Goh Shem (below) was tested by Danny Chrisnanta/Chayut Triyachart; the Malaysians eventually prevailed 21-17 18-21 21-16.

Liang Xiaoyu (right), ranked No.198, was the underdog against her Women’s Singles opponent Tee Jing Yi (No.33), but the Singaporean lifted her game on the occasion to pull off a stunner, 21-12 22-20, to get her team right back into the contest.

Just as he had done in the Thomas Cup finals, Chong Wei Feng once again delivered for Malaysia in Men’s Singles. After a comfortable first-game win, the left-hander survived a determined charge from his opponent Derek Wong, making it 2-1 for Malaysia with a 21-9 21-18 result.

Yao Lei and Shinta Mulia Sari had a 2-0 career record over Women’s Doubles opponents Vivian Hoo/Woon Khe Wei of Malaysia, but both matches had been three-game affairs. This time the Singaporeans were able to close it out in straight games, 21-9 21-18, to set the stage for a dramatic fifth match.

The momentum had swung Singapore’s way, for Danny Chrisnanta/Vanessa Neo were favourites against Chan Peng Soon/Lai Pei Jing as they had beaten the Malaysians earlier this year. With a first-game victory, the Singaporeans were within sniffing distance of an historic upset, but to Chan/Lai’s credit, they hung on and did not let the occasion get the better of them. The Malaysians turned the tide against the 2013 Dutch Open champions, winning the contest 17-21 21-12 21-14, leaving the Singaporeans ruing their missed opportunity. The other semi-final was unexpectedly one-sided. India chose to field a scratch combination in the opening Mixed Doubles and for a while it looked like a masterstroke. Akshay Dewalkar/Jwala Gutta snatched a game off the established combination Chris Adcock/Gabrielle Adcock (BWF home page), but the English pair calmly worked their way back in (21-16 16-21 21-11) to win the lead for their country.

The Men’s Singles was between the evenly-matched Kashyap Parupalli and England’s Rajiv Ouseph (below). Parupalli had the career edge at 2-1, but on the day it was Ouseph who was able to control proceedings and he shut out the Indian in straight games: 21-16 21-19.

Chris Adcock returned to the court for Men’s Doubles alongside Andrew Ellis. Although the Indians posed some problems, the England pair eased through in the end, 21-12 13-21 21-16.