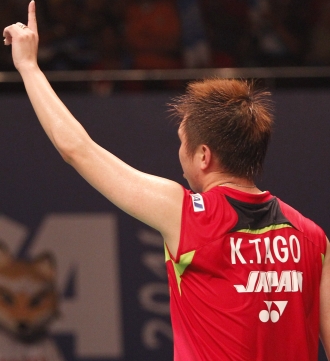 Kenichi Tago stunned his nemesis Lee Chong Wei, getting to within one victory of a maiden World Superseries title today. The Japanese challenger (BWF home page), who had a 1-17 record against the Malaysian going into the Men’s Singles semi-final of the BCA Indonesia Open 2014, sealed a memorable 21-16 15-21 21-16 triumph, thus preventing Lee (above) from reaching his seventh MetLife BWF World Superseries final of 2014. Tago’s win also set up a repeat of the French Open 2013 finale in which he faced Jan O Jorgensen of Denmark.

“It’s awesome being here. I’m thrilled to be in the final tomorrow and beating Chen Long. This can be a difficult place for Europeans to play with the heat and the noise but on the other hand you see how much Indonesians love badminton. You can feel that spirit when you’re on court.”

“I didn’t expect to do this well. I’ve not won a match here since 2008. I got a walkover a few years ago but I’ve not actually won a match in a long time here,” said the ecstatic Dane.

Regarding the final, the crowd favourite was optimistic.

“I beat Lin Dan last week so why not…I’ll go for it tomorrow and see what happens. I took my chances today – you don’t get many against Chen Long. I’ll have to play that same way tomorrow – to attack at the right moments.” In the opening proceedings, Thailand’s Ratchanok Intanon reversed a long spell of mediocre form by making the Women’s Singles final. She will tackle reigning champion China’s Li Xuerui, who overcame stiff early resistance from Intanon’s compatriot Nichaon Jindapon in the other semi-final, 21-19 21-10.

Since winning the BWF World Championships last August, Intanon had reached only a single MetLife BWF World Superseries final – the Korea Open, which she lost. More significantly, she had not beaten any of the top three Chinese in five meetings.

Today, however, Intanon (below) sparkled in her own unique style as she beat Wang for the first time after a five-match losing streak. The Thai started on an aggressive note, but the resilience and steadiness that has served Wang so well this season came to the fore and the Chinese pulled even at 14-14 as Intanon  appeared to lose focus. The Chinese held a slim lead to take the opening game.

However, from then on it was vintage Intanon. The Thai shook off the disappointment of losing the first game and again seized the initiative to put herself in a strong position at 11-4. Despite a late burst that saw Wang jump to within three points, the 19-year-old held firm and forced a decider. Growing in confidence as the end drew near, she mixed smashes and well-disguised drop shots to seal the match: 19-21 21-16 21-13.

“This was a big match for me,” said Intanon. “I have prepared well for this tournament and I want to win this title. It was very tough but luckily I didn’t make too many mistakes and I defended well against her.”

The Men’s Doubles will be a repeat of the Yonex Open Japan showdown last Sunday. Korea’s Lee Yong Dae and Yoo Yeon Seong booked their spot with a hard-fought 21-16 23-21 result over China’s Fu Haifeng/Zhang Nan. The popular Lee, who entered the hall to chants of “Lee Yong Dae” from the capacity crowd, said: “The first game was okay but in the second I felt more pressured and it was harder. We were fortunate to win in two games. I hope we can play well tomorrow again.”

It was a bitter-sweet day for Indonesia. Mixed Doubles pair Tontowi Ahmad and Liliyana Natsir’s quest for a first home title ended in disappointment, but fellow World champions Mohammad Ahsan and Hendra Setiawan gave the crowd much to cheer about in Men’s Doubles as they advanced to the final.

The second Men’s Doubles match saw swinging fortunes as Korea’s Kim Ki Jung and Kim Sa Rang executed their strategy to leave the Indonesian top seeds searching for clues. They frequently caught the Indonesians short by interspersing precise drops amid their fierce smashes. Setiawan and Ahsan were frustrated by their own services too, as Ahsan was faulted by the service judge and Setiawan made frequent errors on serve. A desperate Ahsan even handed his racket to the service judge, asking him to demonstrate the correct serve!

However, the defending champions kept their heads and worked their way back in. With Setiawan brilliantly marshalling the front court, and displaying a tricky range of shots that caught the Kims by surprise, the defending champions slowly exerted their dominance. By the third game it was one-way traffic, with the Koreans appearing clueless in defending the Indonesians’ attack. The 17-21 21-13 21-10 result ensured a sixth meeting with Lee Yong Dae/Yoo Yeon Seong, with the Koreans holding the advantage 4-1.

* The capacity crowd had to swallow a bitter pill early in the day, as Ahmad/Natsir, who had beaten Xu Chen/Ma Jin (below) in the BWF World Championships final, were thwarted by the resurgent Chinese pair this time: 18-21 21-12 21-15. The Chinese face Denmark’s Joachim Fischer Nielsen/Christinna Pedersen (above), who got past Korea’s Lee Yong Dae/Shin Seung Chan 21-18 21-15. “We lost focus in the second game and we tried to get it back in the third but they were more confident,” said Natsir. “They were winning the points at the net and we made too many mistakes. We didn’t get to control the match after the break in the second game and we were too far behind early in the third game.”