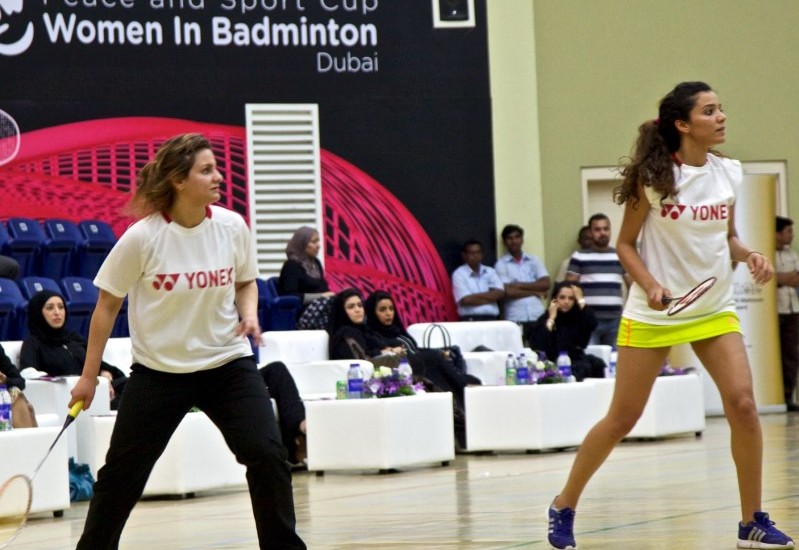 Nearly 50 women from across the Middle East have been participating in the inaugural Peace and Sport Cup – Women in Badminton – Dubai 2014 which began at the Etisalat Academy last Saturday.

“Our leadership is always challenging us to find the means to consolidate Dubai’s position on the world map. Badminton is a popular sport with a huge following and this event that caters to women players from the region will go a long way in achieving our goals,” noted DSC Secretary General, Dr. Ahmad Saad Al Sharif. Dr. Bouzou, who has been associated with Dubai following the successive staging of the Peace and Sport Forum here last year, reiterated that the city is a key player in fostering peace by using sport as a tool. “I come here as a friend to launch this unique event that brings all women badminton players from the Arab world together, and hopefully there will be new friendships established by the time the competition is finished,” said Dr. Bouzou.

Lund, a former badminton doubles specialist from Denmark, was keen to witness the promotion of his sport in the region.

“It’s a unique partnership that we are witnessing here and it brings in great values. I am convinced this tournament will be a great inspiration for the entire region. It is an opportunity to build friendships using sport – in this case, badminton – as a tool for peace,” stated the BWF Secretary General.

The first round of the badminton tournament, featuring doubles pairs from different nationalities, got underway yesterday with the preliminary rounds. Players have been divided into two groups and the best two pairs from either group advanced to the knockout stages, with the final being played later today. Various workshops for coaches and technical officials are also being held. BWF home page: The Jordanian-Moroccan combination of Liena Mazahreh (left) and Jinane Bitari in action. They have qualified for today’s final of the Peace and Sport Cup – Women in Badminton – Dubai 2014.