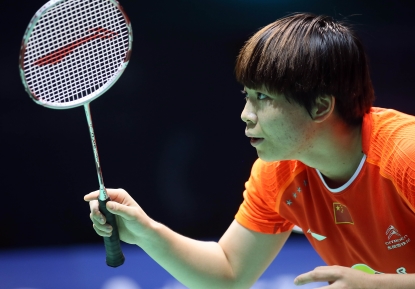 Chen (featured image) starred in both her doubles events to ensure that Chinese players won three of the four finals they figured in. The only spoiler for them was Japan’s Akane Yamaguchi, who defended her Women’s Singles title beating He Bing Jiao in three games. Lin Gui Pu emerged Men’s Singles champion over compatriot Shi Yuqi in another three-game battle. Puavaranukroh Dechapol and Ketlen Kittinupong won the Men’s Doubles title, the first for Thailand in that category. Men’s Singles was a contest between the touch and courtcraft of second seed Shi Yuqi and the fighting qualities of Lin Gui Pu (left). Shi’s languid style, embellished with unusual angles and flourishes at the net, kept Lin on the backfoot, but the challenger made up the difference by throwing himself at every shuttle. Although outclassed by the variety of Shi’s strokes, Lin kept himself in the hunt through his sheer desperation to retrieve every shot. Forced to play extra shots on every rally, Shi’s patience seemed to desert him and Lin was able to outpoint him in the end. The 20-22 21-8 21-18 victory was the perfect birthday gift for the 5/8 seed three days in advance.

“All of us have our special skills, and so has Shi,” said Lin. “I knew what to expect, so I did my best to dive for every shuttle and save the point. I had to be patient and stay in the rally.”

Akane Yamaguchi (right), despite struggling through the fortnight in both the team and individual events, staged a come-from-behind effort over He Bing Jiao 14-21 21-18 21-13. The favourite had lost a match in the team event and a game in three of five matches leading up to the final. The trend continued with He Bing Jiao taking the first game as Yamaguchi was repeatedly caught by the challenger’s sharp left-handed strokes.

The second game began poorly for the defending champion as she trailed 1-6, but gradually she turned it around, forcing He to do most of the running. The key to her victory was the tightness of her net shots, some played with her opponent hovering in front. Once Yamaguchi cut down her errors from the back court, there was little He could do but scamper around to retrieve. The relentless accuracy and power of the top seed wore down the challenger, who committed a series of errors towards the end.

“I was surprised by how badly I played in the first game,” said Yamaguchi. “I couldn’t control the shuttle at all from one side. I got more confident when we changed ends. The match today was more difficult than the semi-final.” Asked if Ratchanok Intanon’s hat-trick of the world junior title was on her mind, she said: “I’m not worried about any record. I’m taking it one day at a time.” Huang Kaixiang and Chen Qingchen (left) gave China the perfect start to the day with a commanding performance over Indonesia’s Muhammad Rian Ardianto/Rosyita Eka Putri Sari in the Mixed Doubles final. The Indonesians had taken a game off the Chinese during the team final, but they were blown away by Huang’s power and Chen’s interceptions at the net. Huang won a point nearly each time he fired his powerful jump smash and nothing Indonesia did could contain the rampage. Huang and Chen retained their title in 30 minutes, 21-12 21-17.

“After I lost the Men’s Doubles quarter-finals, I was extra motivated to win today because I wanted a title from this event,” said Huang Kaixiang. “Our spirit was quite high and we never wanted to give up. Winning this title for the second year in a row has made me forget all my troubles.” * Chen Qingchen’s second gold medal came in Women’s Doubles partnering Jia Yi Fan (above), with another one-sided victory over Indonesia. Indonesia’s Rosyita Eka Putri Sari and Apriani Apriani were outclassed on all counts, as Jia Yi Fan’s heavy left-handed smashes from the back and Chen’s sharpness at the net repeatedly punctured their defence. Apriani’s shaky serves in the second game blew away whatever little hopes they harboured. Chen and Jia’s title victory meant that China have regained the Women’s Doubles gold medal which they had last won in 2010, and was the country’s 12th title in 16 editions of the championships.

“It feels good to have won two gold medals,” said Chen. “But there’s still a long way to go.”

* Puavaranukroh Dechapol and Ketlen Kittinupong (left) outplayed Japan’s Masahide Nakata/Katsuki Tamate 21-16 21-18 in the Men’s Doubles final. The Thais rarely allowed Nakata and Tamate to attack, relying on their drives and net game to deny the Japanese any momentum.