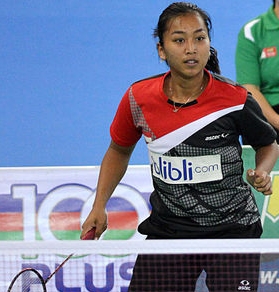 Rosyita Eka Putri Sari starred for Indonesia as she made two finals at the JATI BWF World Junior Championships for the Eye Level Cups today. Eka Putri (BWF home page) and Apriani Apriani were too strong for China’s Jiang Binbin/Tang Pingyang in Women’s Doubles, clinching the issue in straight games: 21-13 21-16. The Yogyakarta native then returned with Muhammad Rian Ardianto for the Mixed Doubles semi-final against Korea’s Park Kyung Hoon/Park Keun Hye and the pair was just as impressive in winning again in straight games: 21-13 21-13.

The finals will feature contenders from four nations. China have assured themselves of the Men’s Singles title and a shot at three others (Women’s Singles, Women’s Doubles and Mixed Doubles). Chen Qingchen (above) did for China what Eka Putri had done for Indonesia, assuring her team’s presence in the Women’s Doubles and Mixed Doubles finals. The only final without Chinese representation will be Men’s Doubles, which will see Thailand’s Puavaranukroh Dechapol and Ketlen Kittinupong take on Japan’s Masahide Nakata/Katsuki Tamate.

“Compared to the other Chinese pairs, Jiang and Tang weren’t so strong, so it wasn’t difficult today,” said Eka Putri. She and partner Apriani will match wits against Chen Qingchen/Jia Yi Fan in the Women’s Doubles final and Eka Putri conceded that it would be a far tougher challenge. “We are confident. Technically we are as good as them, but they are physically quite strong.”

Ardianto, who lost one semi-final but made up for it with his strong performance in Mixed Doubles, was philosophical about his roller-coaster day. “I have only one life, so I have to give it everything,” he said, on having to overcome his disappointment at losing a close Men’s Doubles match. “I was a little tired after that match, but once the Mixed Doubles began, I didn’t feel anything.”

Ardianto and Eka Putri face title favourites Huang Kaixiang/Chen Qingchen in the final. Huang/Chen took just half-an-hour in decimating the Japanese pair Yuta Watanabe/Aria Higashino 21-19 21-12, and Ardianto conceded he and Eka Putri had a difficult task ahead. “We lost to them in the team final, but we have learnt some lessons from that match and we have to be better prepared.”

Meanwhile, defending Women’s Singles champion Akane Yamaguchi (right) of Japan found her best form late in her match against China’s Qin Jinjing. The Japanese top seed was a game adrift but got better as the match progressed and finished strongly, 19-21 21-13 21-14.

“I was tired after the first game but I didn’t feel any fear,” Yamaguchi said. The top seed will have to solve another Chinese riddle in the final, in the form of He Bing Jiao who was too strong for Yamaguchi’s compatriot Aya Ohori in a contest between two left-handers. * The Men’s Singles semi-finals were all about China as second seed Shi Yuqi and 5/8 seed Lin Gui Pu set up a final showdown. Lin had some trouble quelling his compatriot Zhao Jun Peng in the second game, but he picked six points in a row at the end to finish his task in straight games, 21-12 21-19. Shi Yuqi would have expected a harder battle from Ginting Anthony, but the Indonesian’s resolve evaporated after he lost a close opening game. Several unforced errors flowed from his racket; a serve into the net gave his opponent match point, which he converted when Ginting netted his return.

* Masahide Nakata and Katsuki Tamate edged past Indonesia’s Muhammad Rian Ardianto/Hendrik K Clinton in a thriller, 15-21 22-20 21-18. The second game was fought tooth and nail: Japan clinched it 22-20 and withstood a strong comeback by Indonesia in the deciding game to ensure their place in the final. In the final they will be up against Thailand’s Puavaranukroh Dechapol and Ketlen Kittinupong (above), who surprised Korea’s Kim Jae Hwan/Kim Jung Ho 21-14 21-18. The Koreans were expected to be strong contenders for the final after their brilliant quarter-final victory over top seeds Huang Kaixiang/Zheng Si Wei of China, but they appeared subdued and unable to raise their performance against the Thai pair.