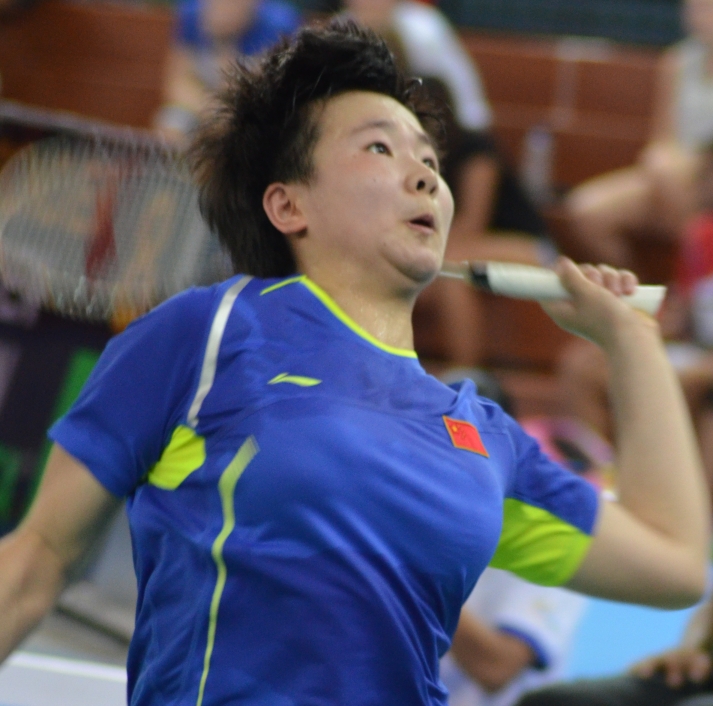 Top seed Jonatan Christie of Indonesia tumbled out of the JATI BWF World Junior Championships today as China asserted their dominance in the quarter-finals. The Men’s Singles favourite was beaten by a display of blinding pace and power from China’s Lin Gui Pu (left), 21-17 21-18. China have three contenders in the Men’s Singles and two in the Women’s Singles semi-finals. The only major setback for China

was in the last match of the day, in which Korea’s Kim Jae Hwan/Kim Jung Ho upset Men’s Doubles favourites Huang Kaixiang/Zheng Si Wei in a brilliant encounter: 15-21 21-17 21-18.

There will be no European presence in the semi-finals, as Denmark’s Alexander Bond/ Joe Eipe fell in the Men’s Doubles quarter-finals.

It was Men’s Singles action that was the highlight of the day. Lin was in poor form last week during the Suhandinata Cup matches, having lost two of his three singles matches. If Christie expected to face a player short of confidence, he was taken by surprise, for Lin was a completely changed version. Setting a blistering pace, leaping high at every shuttle in the air and smashing powerfully and precisely, Lin tore apart Christie’s defence. The top seed tried to contain the damage by reducing the pace of the rallies in the second game, and did appear to have gained the upperhand midway. However, a couple of mistakes was all it took for Lin to regain the edge and he never let his foot off the pedal as he closed out the match.

“I didn’t think too much,” said Lin. “I didn’t feel any pressure as I had prepared well. I planned to play at the same pace even if the match had gone into a third game. I had fought hard in the team matches too, but I was not able to win.”

Lin’s compatriot Shi Yuqi, the second seed, had a light workout against Malaysia’s Satheishtharan R. As with Christie’s match, it was the superior pace and sharp angles of the Chinese player that made the difference. The 21-12 21-7 result was achieved in 33 minutes.

“Today was a relaxed match,” Shi admitted. “Maybe my opponent was not confident enough. In the semi-finals I will play (Indonesia’s) Ginting Anthony. I have played two Indonesians before, so they might analyse my games and prepare him well.”

Malaysia were left to rue the loss of 5/8 seed Cheam June Wei to China’s Zhao Jun Peng, 18-21 21-12 21-17. After the first two games were split, the Malaysian worked out the openings against Zhao and was well placed at 14-11. A serve into the net followed by a couple of weak points set Zhao back on track, even as Cheam got increasingly desperate and error-prone.

It will be up to Indonesia’s Ginting Anthony to prevent China from taking the Men’s Singles title. Anthony outclassed Japan’s Kanta Tsuneyama 21-13 21-5.

In Women’s Singles, defending champion Akane Yamaguchi made heavy weather of her quarter-final against Singapore’s Liang Xiaoyu, 21-11 16-21 21-17, while Aya Ohori won an all-Japanese contest against Natsuki Nidaira, 20-22 21-18 21-10. Second seed Busanan Ongbumrungpan of Thailand had no answers to China’s He Bing Jiao (featured image) as she fell 21-11 21-14, but her compatriot Pornpawee Chochuwong (above) put up a stirring contest against China’s Qin Jinjing. Chochuwong started strongly in the decider and had edged ahead, but a serve into the net was all it took for Qin to recover and leave the Thai trailing behind. * As in Men’s Singles, Women’s Doubles too will feature a lone Indonesian representative against three Chinese. Rosyita Eka Putri Sari/Apriani Apriani held off Thailand’s Pacharapun Chochuwong/Chanisa Teachavorasinskun 19-21 21-14 21-13 and were rewarded with a semi-final against Jiang Binbin/Tang Pinyang (left). The other semi-final will feature favourites Chen Qingchen/Jia Yi Fan against Du Yue/Li Yin Hui.

* Japan’s Yuta Watanabe and Arisa Higashino won a thriller over Malaysia’s Tan Jinn Hwa/Goh Yea Ching in a late Mixed Doubles match. The second game in particular was a nail-biting affair, with both teams edging ahead of the other, before the Malaysians finally killed the shuttle to equalise at a game apiece. However, with Tan cramping during the game, the Malaysians couldn’t sustain the challenge and fell 21-7 28-30 21-14. The Japanese face top seeds Huang Kaixiang/Chen Qingchen, while the other semi-final will see Korea’s Park Kyung Hoon/Park Keun Hye against Indonesia’s Muhammad Rian Ardianto/Rosyita Eka Putri Sari.