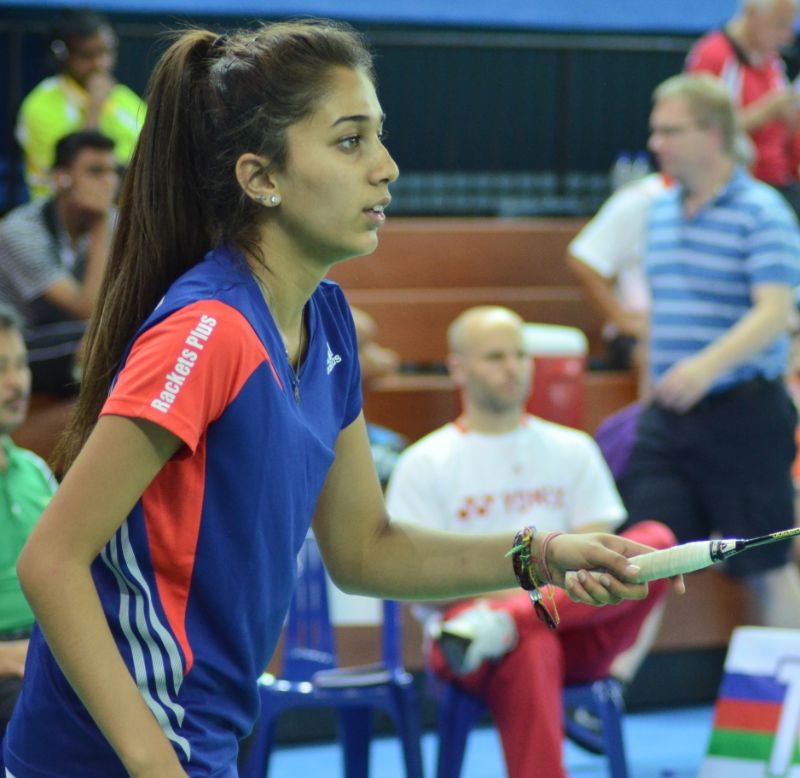 A few days after she’d been in the spotlight, Chinese Taipei’s Lee Chia Hsin crashed out of the JATI BWF World Junior Championships today.

Lee had authored a sensational upset in the World Junior Mixed Team Championships over reigning World Junior champion Akane Yamaguchi, but she failed to cross the first hurdle in the Women’s Singles event for the Eye Level Cup. Lee had a healthy lead against Malaysia’s Ho Yen Mei at 14-7, but could not maintain her advantage and Ho picked off nine straight points to take the first game. Although Lee did well to pocket the second game, she was no match for Ho in the third as the Malaysian completed a 21-17 14-21 21-11 victory in 48 minutes.

Other Women’s Singles players to progress were Malaysia’s Goh Jin Wei, Korea’s Jang Na Ra, Chinese Taipei’s Sung Shuo Yun, Frenchwoman Yaelle Hoyaux (right) and Hong Kong’s Fan Ka Yan. Fan was a trifle lucky to finish her match early as her opponent Ira Banerjee (England; featured image) walked off in tears in the second game with a leg injury. Fan was leading 22-20 17-14 when she retired. The injury however was not serious, for Banerjee returned for the Women’s Doubles with Jessica Pugh and eased past Botswana’s Tshoganetso Banewang/Tessa Kabelo, 21-4 21-8. Malaysia had an impressive win in Women’s Doubles, with Goh Yea Ching and Peck Yen Wei getting the better of 9/16 seeds Kim Ga Eun and Kim Hyang Im in an aggressive contest. Goh was the livewire on the Malaysian side, scurrying around and firing jump smashes to keep the pressure on the Koreans. There was plenty of hard hitting from both ends and the match was poised evenly until the third game when Goh’s relentless attack dented Korean confidence and the third game was won quickly, 21-15 17-21 21-8.

“We had lost to them in a friendly match at the same event last year,” said Goh, “so we were keen to avenge that defeat.”

* Kanta Tsuneyama, who had won a point for Japan in the team tie against China, took just 11 minutes and conceded three points as he raced to victory over Bilegjargal Bayarbyamba of Mongolia in Men’s Singles, 21-1 21-2. Also through to the second round were Kazuki Kirita (Japan, above), Ng Xin Rei Ryan (Singapore), Sean Vendy (England), Nabin Shreshtha (Nepal), Adulrach Namkul (Thailand), Joel Eipe (Denmark) and India’s Harsheel Dani and Talar Laa.

* Despite her loss in Women’s Singles, Lee Chia Hsin can look to her Mixed Doubles event. Lee and partner Lee Chia-Han escaped a tight situation in the second game against China’s Yao Zhidi/Hu Yuxiang, 21-13 22-20. Most of the Mixed Doubles matches were decided in straight games, but there were a few exceptions. Korea’s Choi Jong Woo/Kim Hyang Im needed three games to get past Alexandre Hammer/Yaelle Hoyaux of France as did India’s Sankeerth BR and Mira Mahadevan, 21-12 18-21 21-14 victors over Czech Republic’s Jan Somerlik/Monika Svetnickova.