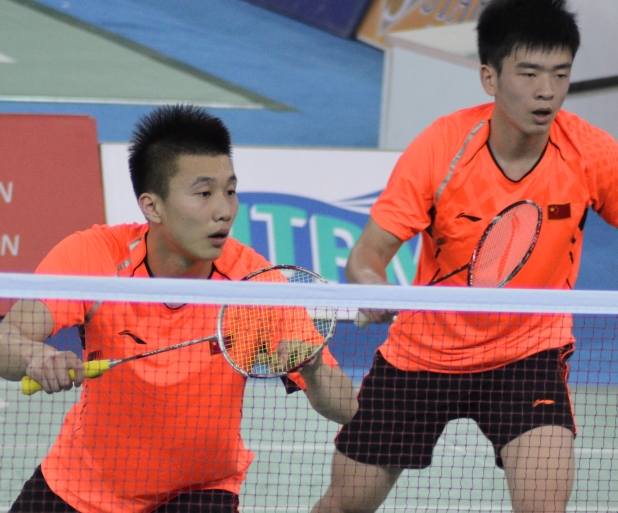 China will take on Indonesia in the final of the JATI BWF World Junior Mixed Team Championships 2014 for the Suhandinata Cup. The semi-finals today lived up to the occasion as both ties were decided on the final match. After Indonesia had booked their place beating Thailand 3-2, China overcame Japan by an identical score.

All of the Indonesia-Thailand matches were decided in straight games. As Indonesia coach Bambang Suprianto said later, the presence of Rosyita Eka Putri Sari made the difference. Putri Sari and Muhammad Rian Ardianto gave Indonesia the lead in Mixed Doubles and Anthony Sinisuka Ginting (left) made it 2-0 by winning the Men’s Singles against Kantaphon Wangcharoen. However, with world No.18 Busanan Ongbumrungpan (below) in their ranks, Thailand were anything but down and out. Ongbumrungpan decimated Ruseli Hartawan 21-16 21-13 in her Women’s Singles match to annex their first point.

Dechapol Puavaranukroh/Kittinupong Ketlen made it 2-2 by winning the Men’s Doubles over Clinton Hendrik Kudamasa/Muhammad Rian Ardianto. With both Onbumrungpan and Putri Sari figuring in the final Women’s Doubles, it was expected to be a close encounter. However, Putri Sari and Apriani Rahayu were too superior to their opponents Ongbumrungpan and Puttita Supajirakul, clinching the tie with a 21-9 21-13 result.

The China-Japan tie swung one way and then the other. Huang Kaixiang and Chen Qingchen, the current World and Asian Junior champions in Mixed Doubles, were tested in the first game by Yuta Watanabe/Arisa Higashino; the Chinese however completed the job 21-19 21-18.

Lin Guipu had lost a close match against Malaysia’s Cheam June Wei yesterday, but he wasn’t even in the reckoning against Kanta Tsuneyama in their Men’s Singles match. Tsuneyama was never troubled during the course of his 21-11 21-15 victory, which helped Japan to 1-1.

Huang Kaixiang and Yuta Watanabe returned for their respective countries for the Men’s Doubles – Huang with fellow-Asian Junior champion Zheng Siwei (featured image) and Watanabe with Kenya Mitsuhashi. The left-right combination of Watanabe and Mitsuhashi posed plenty of problems to the Asian Junior champions, especially in the second game, in which the Japanese avoided fast exchanges. That phase wasn’t to last; Huang and Zheng turned the momentum in the third game to steer China away from a dangerous situation, for Akane Yamaguchi was up next for Japan in Women’s Singles.

Yamaguchi had walked off yesterday’s match in tears but today she was a different player. Confident and aggressive, she gave little room for Qin Jinjing to outmanoeuvre her. The 21-14 21-17 victory turned the spotlight on the final match: the Women’s Doubles.

Yet again China’s doubles strength came to the fore. Chen Qingchen and Jia Yifan were in a higher league than Wakana Nagahara/Chiharu Shida, bulldozing their way past the Japanese 21-7 21-10 to secure China’s place in the final.

Indonesian coach Bambang Suprianto admitted his team was up against formidable odds.

“Rosyita made the difference for us,” Suprianto said. “The key was that she ensured us two points. Against China it will be difficult. I’m happy at our performance. Our target was the semi-finals.”

Malaysia, whose Women’s Singles player Kisona Selvaduray suffered an injury in her match against China yesterday, got the better of Chinese Taipei 3-1 in the 5-8 stage play-offs. Selvaduray’s replacement Lee Ying Ying was the saviour for the hosts, closing the contest in the fourth match. Malaysia got the lead through Goh Yea Ching/Tann Jinn Jwa in Mixed Doubles and consolidated through Lee Zii Jia in Men’s Singles. Chinese Taipei pulled one back in Men’s Doubles when Lee Chia Han/Wu Yuan Cheng overcame a late challenge from Tan Jinn Hwa/Goh Sze Fei, 21-11 23-21. Lee Ying Ying faced Sung Shuo Yun and it was a closely-fought affair in the second game. Lee was able to shake off her stubborn opponent in the late stages; the 21-17 21-19 victory putting the tie beyond Chinese Taipei’s reach.

The tie of the morning session was Singapore’s come-from-behind victory over Germany in the 9-12 stage play-offs. The first match, Men’s Doubles, set the stage for the drama that unfolded – Singapore’s Tan Mingshun/Ong Soon Yang Bernard were engaged in a sensational tug-of-war with Bjarne Geiss/Daniel Seifert. The Singaporeans were down a game and 16-19, but conjured a second game win. The third was usual – after the teams were locked 11-all, neither could take a lead of more than a point over the next 34 points! Finally, it was the German pair that edged through, 21-17 19-21 30-28.

Germany made it 2-0 through Yvonne Li/Eva Janssens in Women’s Doubles. Singapore were on the brink when Ng Zin Rei Ryan (above) lost the first game of his Men’s Singles match to Max Weisskirchen, but the bespectacled Ng survived to make it 1-2 for Singapore. Liang Xiaoyu equalised by beating Luise Heim (Women’s Singles), 21-5 17-21 21-14, before Ong/Chua Yi Ying Elaine completed the dream comeback by holding off Max Weisskirchen/Eva Janssens 21-15 24-22 (Mixed Doubles).