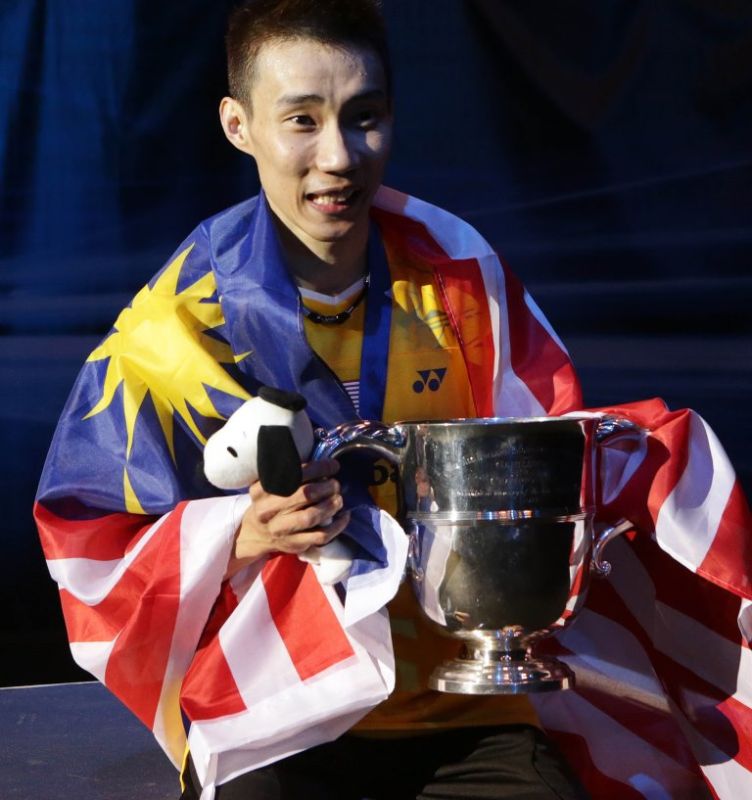 The legend of Lee Chong Wei loomed large at the Yonex All England 2014 this afternoon with the Malaysian savouring a famous feat as another badminton veteran – Liliyana Natsir – romped to a hat-trick in Mixed Doubles.

Forced to settle for the two titles it had been guaranteed overnight, China shared the spoils with Indonesia as wonder woman Natsir partnered Tontowi Ahmad to a memorable three-peat inside Birmingham’s National Indoor Arena; seizing the championship they also claimed last year and in 2012. The satisfaction of blitzing their Chinese archrivals, Zhang Nan and Zhao Yunlei, 21-13 21-17 made victory all the sweeter as Indonesia also took Men’s Doubles honours through Mohammad Ahsan and Hendra Setiawan.

However, the limelight belonged to one of badminton’s most popular players, the durable Lee Chong Wei, who conjured up a performance of bygone vintage to deny his nemesis, Chen Long’s title defence in straight games – 21-13 21-18. Sinking to his knees and celebrating with frenzied double fist pumps, the 31-year-old showed how much it meant to beat the top Chinese to whom he lost their last four Men’s Singles encounters. “I tried my best today. This may be my last All England so I’m very happy. Chen Long is a good player and I needed to play my best to beat him,” said the world No. 1, admitting it was a tough match which sapped him physically.

All-out attack and precision in the first game and early part of the second characterised Lee’s success as the lean, well-toned top seed employed speed, acute angles and deft shot-making to telling effect against an out-of-sorts Chen who started slowly in most of his outings all week. This time though the world No. 2 was unable to rebound. Lee sprinted ahead and capitalised on leads of 13-6 and 15-8 – the net and luck even on his side – as fans’ deafening cheers spurred him on.

Having surrendered the first game on one of Lee’s trademark monster jump smashes, Chen Long (above) was quickly up against it again in the second game, trailing 10-4. That he clawed back to 11-all, even drawing some tentative and wayward shots from his opponent, was to his credit – but it wasn’t enough. It was Lee Chong Wei’s day and he summoned a final flourish to capture his third All England crown; autographed with a signature smash on his second match point.

“He was more patient than me. I was rushing. He played some amazing points so I can accept this defeat,” said the gracious runner-up.

Revealing he is still nursing an ankle injury, Lee enjoyed the taste of revenge not only for last year’s All England defeat to Chen Long but also for more recent clashes such as the Denmark Open last October and the Korea Open in January this year.

Meanwhile, Indonesia’s crowd pleasers, Ahmad and Natsir (left), were also at their lethal best, repelling the challenge of the Olympic champions who tried to complete their failed mission from a year ago. Ever-energetic Natsir was inspirational while her partner held his own in the backcourt to nullify his opposite number, Zhang’s assault. That left the latter frustrated, earning the Chinese player a few cautions from the umpire. Natsir was also getting the better of Zhao at net to wrest the upperhand from China.

“We are happy with this hat-trick. My partner, Tontowi, played well. We want to be more successful and even win again here next year and the year after,” declared a buoyant Natsir, listing the World Championships and Asian Games as their other targets for 2014. * Wang Shixian (above; left), mostly in the shadows of compatriots Li Xuerui and Wang Yihan in recent years, came to the fore, winning the Women’s Singles final versus an erratic Li. Maintaining greater composure in a match which saw a mixture of good rallies with jittery shot selection, Wang prevailed 21-19 21-18 to clinch her second All England championship. “I’m really happy from the bottom of my heart though there are still lots of big tournaments to win,” said China’s world No. 3, smiling broadly as she basked in the spotlight.

* Men’s Doubles World champions and BWF World Superseries Finals winners, Ahsan and Setiawan, opened Indonesia’s finals account with a 21-19 21-19 triumph versus Hiroyuki Endo/Kenichi Hayakawa. It stretched their unbeaten run against the Japanese to 6-0 and earmarked them as the ones to beat in 2014. Though the scores were close in both games, the Indonesians always seemed in control and were able to stay focused at critical moments; something the losers admitted they lacked (presentation ceremony: right).

* Yu Yang and Wang Xiaoli (below) returned to their winning routine in a familiar venue, beating the new combination of Ma Jin and Tang Yuanting, 21-17 18-21 23-21. The defending Women’s Doubles champions were tested by their Chinese peers in a battle lasting an hour and 21 minutes. Thanking the supportive spectators, the winners attributed the result to hard work and confidence in each other.