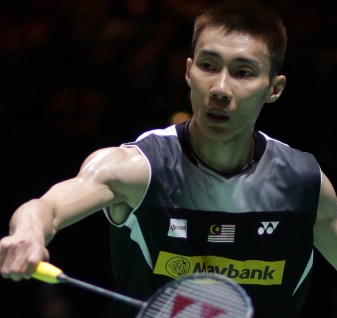 China assured itself at least two crowns as the superpower flexed its muscle in the semi-finals of the Yonex All England 2014 today. It was up to Thailand’s Ratchanok Intanon in Women’s Singles and Japan’s Ayaka Takahashi/Misaki Matsutomo in Women’s Doubles to prevent all-China finals. Neither was given an inch as Li Xuerui and Ma Jin/Tang Yuanting  (left) decimated them in quick time to cruise into their respective finals, where their compatriots await them. In the middle of the familiar story of China’s dominance, Malaysia’s Lee Chong Wei sealed a place in his fifth consecutive All England final. Lee will be aiming for his third All England title when he tackles defending Men’s Singles champion, Chen Long, and will seek to reverse a run of four defeats to the Chinese world No. 2.

The Malaysian had his toughest match of the week against Son Wan Ho. The Korean won the first game rather comfortably and had the top seed in a spot in the second game. Lee, however, was able to shift gears and snatch the game from 15-17 down. He continued in the same vein to clinch the decider: 14-21 21-19 21-15.

Chen Long, on the other hand, had his easiest match of the event, needing just 33 minutes to outclass his younger compatriot Wang Zhengming, 21-17 21-14. Chen will be favourite against Lee in the final, leading their head-to-head 8-7. The early phase of the Women’s Singles semi-final between Ratchanok Intanon and Li Xuerui (above) promised a mouth-watering contest. This was their first meeting since Intanon’s BWF World Championships victory over Li and for a brief while it looked like Intanon was continuing from where she left off. Her range of strokes once again unsettled Li and the Thai was in total control at 11-5. From 8-13, however, Li broke the spell and, with sheer athleticism, returned all of Intanon’s deceptive strokes. Intanon’s game slowly fell apart, with her best strokes not winning her points, and she began making errors even on elementary clears. The second game was a washout as her self-belief deserted her, while Li got better and better, especially at net where she intimidated Intanon with her tumbles off the tape. Li wrapped up the semi-final 21-18 21-8 in 35 minutes. Li will be favoured to regain her 2012 title as she takes on another former champion, Wang Shixian, who got past compatriot Wang Yihan 21-8 21-15 for the first time in eight matches since January 2011.

Indonesia had a profitable day as their two World champion pairs made the finals. Tontowi Ahmad/Liliyana Natsir (right) will be in line for a hat-trick of Mixed Doubles titles when they face Olympic champions, Zhang Nan/Zhao Yunlei of China, in a repeat of last year’s final. The Indonesians destroyed Korea’s Ko Sung Hyun/Kim Ha Na 21-13 21-11 in just 31 minutes.

Men’s Doubles World champions Mohammad Ahsan/Hendra Setiawan too made a quick meal of their compatriots Markis Kido/Gideon Markus Fernaldi. The favourites won the exchanges in a blitz and, with Fernaldi struggling to contain his nerves, the French Open champions were in all sorts of trouble. Few rallies went beyond five or six strokes as Setiawan and Ahsan caught their opponents with their flicks and drives and tight netplay. Fernaldi smashed into the net on the first match point to hand a 21-7 21-12 victory to Ahsan/Setiawan. The match was over in just 22 minutes.

* The combination of youthful energy and experience powered China’s Ma Jin and Tang Yuanting into the Women’s Doubles final. Third seeds Ayaka Takahashi and Misaki Matsutomo stayed level with them only in the early phase, but soon the power of Tang from the back and Ma’s instinctive interceptions at net began to slice apart the Japanese challenge. They had few answers in the second game and Ma/Tang cruised past them 21-17 21-12 to book their place against compatriots and World champions, Yu Yang/Wang Xiaoli.

* After his heroics in the quarter-finals, Korea’s Ko Sung Hyun was left to rue two semi-final defeats. Ko and Shin Baek Choel had the early advantage against second seeds Hiroyuki Endo/Kenichi Hayakawa (left), but the Japanese again fought back from the brink just as they had done in previous matches. The 16-21 21-17 21-13 verdict for Hayakawa and Endo took exactly an hour.

* Xu Chen/Ma Jin’s jinxed run against compatriots Zhang Nan/Zhao Yunlei continued as they stumbled to their 16th defeat in 18 matches. The Olympic champions won 21-11 9-4, with Xu Chen retiring due to injury.