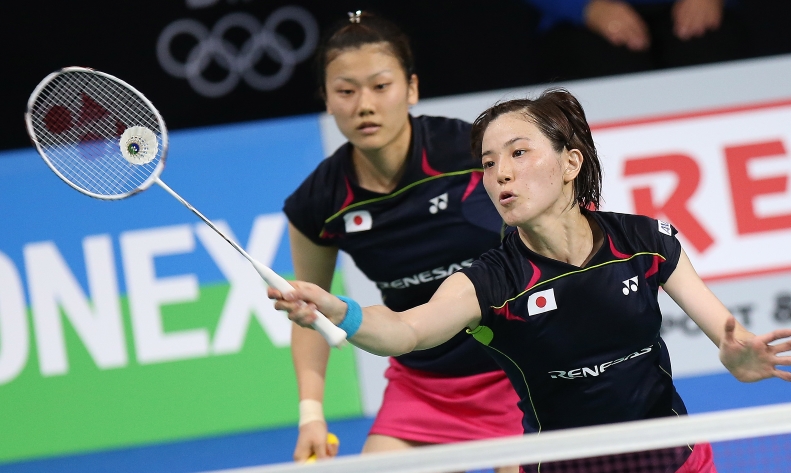 In an epic tug-of-war, played out over an hour and 40 minutes at the Yonex All England 2014, the blend of experienced Maeda and her younger spirited partner finally broke the resolve that saw Bao and Tang (left) wrest seven titles in a row, starting with the Dutch Open last October. Hardly could spectators who stayed late at the National Indoor Arena (NIA) have imagined the treat awaiting them as the last match on court one began. Though the early scores were close, nothing hinted at what was to come as fans have grown accustomed to the dynamic Chinese finding a way to win regardless of the situation facing them. So, even when the Japanese surged ahead, taking the first game 21-16, many would have expected a comeback by Bao/Tang.

The rearguard action did come in the second game, though almost too late as they withstood match point at 21-20 to Japan. The Chinese reeled off three straight points to force a decider. Boasting leads of 8-4 and 12-9 in the third game, Bao and Tang again appeared unbeatable but there was another final twist to this enthralling saga. Kakiiwa and Maeda (featured image) found an extra gear; pulling level and then motoring on to an unforgettable victory – sealing it on their third match point! There was also despair for the towering duo of Mads Conrad-Petersen and Mads Pieler Kolding whose imposing height clearly didn’t intimidate their Chinese Taipei rivals, Lee Sheng Mu and Tsai Chia Hsin. The Men’s Doubles No. 7 seeds regained their composure to win 21-13 16-21 21-18. Sadly for another Danish pair, Anders Skaarup Rasmussen/Kim Astrup Sorensen, it was a case of what a difference a day made. Unable to reprise their first-round heroics which downed the reigning All However, the seismic surprises were the demises of Boe/Mogensen and Pedersen and her partners in the Women’s and Mixed Doubles categories. The former were little match for Indonesian livewires, Gideon Markus Fernaldi and Markis Kido (above), who banished the Danes – 21-18 21-12 – to spectator seats for the duration of the tournament. Pedersen was uncharacteristically off-colour, misfiring repeatedly as she and Rytter Juhl wasted a good start in Women’s Doubles versus China’s Ma Jin and Tang Yuanting. Though claiming the first game, the Europeans faltered inexplicably thereafter to surrender 17-21 21-9 21-8. Ironically, Pedersen’s second loss of the evening came at the hands of Rytter Juhl and Kolding (left) in Mixed Doubles. The latter brushed aside Fischer Nielsen and Pedersen, 21-17 24-22, to be the lone Danish pair vying for the semi-finals. * Chris and Gabrielle Adcock (below) found themselves in familiar territory as the lone English representation towards the business end of a Superseries event. Their 21-13 21-15 defeat of Germany’s Peter Kaesbauer and Isabel Herttrich in Mixed Doubles was the only success which the hosts enjoyed today.