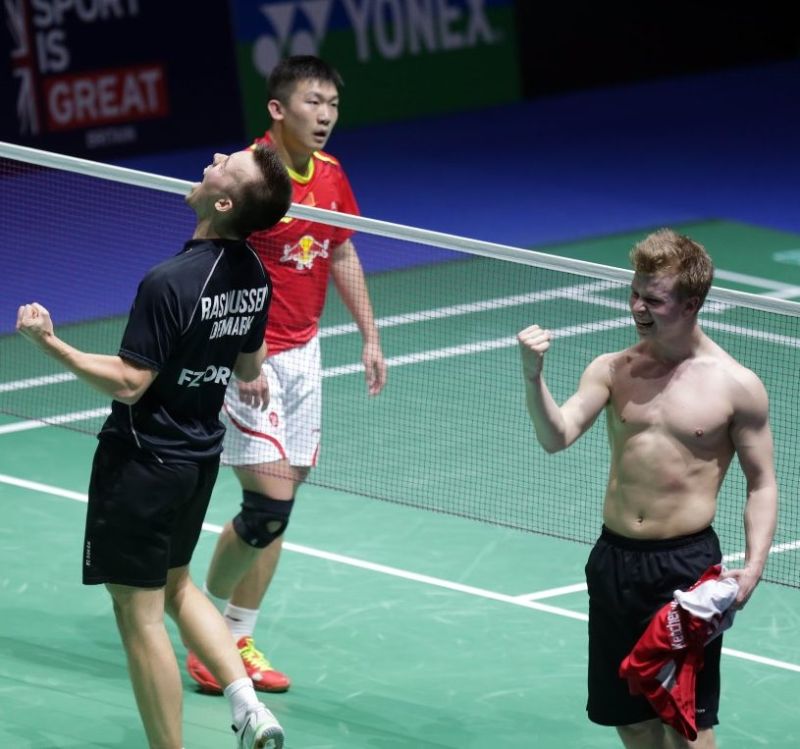 No Men’s Doubles pair has defended its title at the Yonex All England Open since 1996 – and that statistic will remain for at least another year. China’s Liu Xiaolong/Qiu Zihan, seen as contenders for the title, crashed out in the opening round today to Anders Skaarup Rasmussen/Kim Astrup Sorensen of Denmark (featured image). Even more surprising was the score as the fourth seeds perished without a fight; 21-12 21-9 in just over half hour. Liu/Qiu’s loss was among a few setbacks for China but it could have been even worse for the Asian powerhouse; defending three All England titles from last season. The Chinese would have breathed a massive sigh of relief as 2012 Women’s Singles champion Li Xuerui teetered on the brink of elimination – facing a match point – but avoided the carnage in a long thriller against young Thai, Busanan Onbumrungpan. The top seed looked to be on course as she pocketed the first game 21-14, but her opponent comfortably clinched the second. Momentum see-sawed with Ongbumrungpan and then Li leading in the decider. From 17-19 down, the Thai won four straight points. One more would seal Li’s fate but the Chinese world No. 1 is made of steely stuff and it came to the fore under pressure. She refused to yield and came through the fire 21-14 15-21 22-20 – punching the air in celebration.

“It was tough but that happens in the first round sometimes. Busanan played really well and I was struggling with the conditions. The shuttle was slower so it was harder for an attacker like me to play my normal game,” explained a relieved Li afterwards.

“I will be better prepared for my next match. This tournament is very important to me because in 2012 I won here and it was the start of a great season for me. I hope I can repeat that success.” Chinese Taipei to Michelle Li (right), 22-20 22-20. Canadian Li capitalised on the few opportunities she had in either game; in the second Tai had three game points but the Canadian levelled and triumphed on her first match point. For a player who has lost the only match she has played this year – a first-round loss at the Yonex German Open last week – the result would have been particularly satisfying.

Last year’s runner-up Ratchanok Intanon (Thailand) didn’t look sharp either in her opener against Gu Juan. The Singaporean nearly stole the match from Intanon, levelling a 14-17 deficit in the decider. However, Intanon remained strong in the final stages to close it out 20-22 21-15 21-18.

“I was a bit nervous and she pushed me. I hope I will play better as I go on. My aim is to make the quarter-finals and take it from there,” said the 19-year-old World champion.