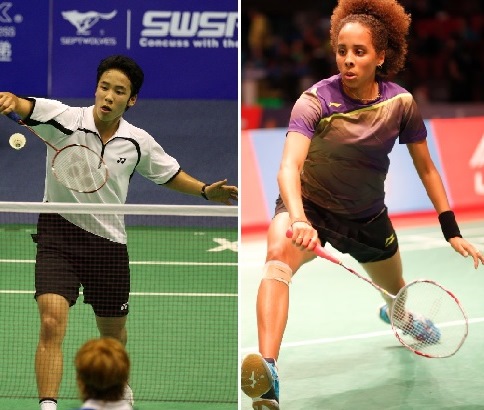 Oliver and Susannah Leydon-Davis prevented Australia from sweeping the individual titles at the 2014 Kumpoo Oceania Championships that concluded on Saturday.

The siblings (right) from Waikato, New Zealand, took home the Mixed Doubles title in the first match on finals day. The siblings were taken the distance in the first game by Australia’s Matthew Chau/Jacqueline Guan, but proved far stronger in the second as they won 21-19 21-13.

Jacqueline Guan made up for her disappointment in Mixed Doubles by claiming the Women’s Doubles title with Gronya Somerville. Guan and Somerville won an all-Australian final over Jacinta Joe/Louisa Ma, 21-14 21-17, before Raymond Tam/Glenn Warfe rounded off the day’s action winning the Men’s Doubles. Tam/Warfe (below) took just 25 minutes to brush past Matthew Chau/Sawan Serasinghe, 21-11 21-13.

It was the Women’s Singles final that stole the show. Chan has been one of New Zealand’s most accomplished players, with a double (Women’s Singles and Women’s Doubles) in 2008 and a bronze medal in 2006. The top seed edged past in a close first game against Verdet Kessler (right; featured image), but the sixth seed fought back to take the next two and claim the title in exactly an hour.

The Men’s Singles final was one-sided as Jeff Tho, bronze medallist in 2008, used his experience to maximum effect against Ashwant Gobinathan. Tho took just 26 minutes for his first Men’s Singles title at the Oceania Championships.

Having won the Robson Shield for the Mixed Team Championships earlier in the week, Australia would feel pleased with their efforts. The individual championships were seen all over the world as there was live streaming of the quarter-finals, semi-finals and finals.

* Top seeds in Mixed Doubles, Ross Smith and Renuga Veeran (Australia), fell in the quarter-finals to compatriots Luke Chong/Talia Saunders. Smith/Veeran retired in the first game when they were leading 19-13. Veeran also conceded a walkover in the Women’s Doubles semi-finals (with Tang He Tian) to Jacinta Joe/Louisa Ma.

* On her way to the final, Kessler triumphed over second seed Anna Rankin (New Zealand) in the quarter-finals (21-16 21-8) and fourth seed Joy Lai (Australia) in the semi-finals (21-12 21-8), before concluding a dream campaign with her victory in the final.