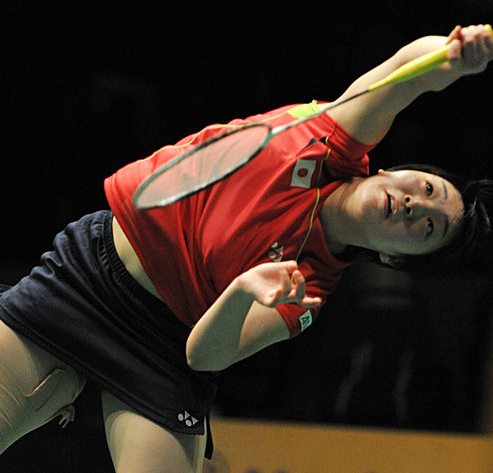 whose illustrious footsteps she follows.

Just when it seemed Intanon – runner-up on Sunday in the Victor Korea Open – might have emerged from the doldrums that haunted her game late last season, she plummeted again; stunned by a returning machine – Akane Yamaguchi – in the opening round at Putra Stadium.

The Women’s Singles third seed – the reigning World champion and a three-time World Junior champion – was left bewildered by the indefatigable defence of the 16-year-old Japanese qualifier, crashing out 21-18 23-25 21-16. The World Junior champion blunted her Thai rival’s attack with a relentless retrieving ability, leading to the unusual sight of Intanon exiting a Superseries tournament in the first round for the first time in over a year.

Nothing 18-year-old Intanon did could give her a decisive advantage against Yamaguchi (BWF home page), who is increasingly proving a force to be reckoned with after her Japan Open victory last year. Intanon sent the shuttle to the farthest corners, only to see Yamaguchi dash across and send the shuttle back. The match would have ended in straight games after Yamaguchi overturned a 11-19 deficit to hold two match points, but Intanon scrambled energetically to force a decider. The outcome however did not change as Yamaguchi played at the same pace even in the dying stages, leaving Intanon short of answers.

“I’d given up in the second game as I was trailing,” said Yamaguchi. “I was saving myself for the third game.”

Asked if beating the World champion meant she was now ready to challenge for a top-ten spot, she said: “I won because of Intanon’s mistakes. I did not plan this victory. It just happened. I will try my best to challenge the other top players.” In the continuing saga of “what a difference a few days make”, Men’s Doubles second seeds Mathias Boe/Carsten Mogensen of Denmark – winners in Seoul – were roughly brought back to reality with a 24-22 17-21 21-18 beating by Malaysia’s Goh V Shem/Lim Khim Wah (left). Men’s Singles second seed and Korea Open champion, Chen Long, was a point away from succumbing to a similar fate. However, the Chinese star survived a massive scare against Korea’s Lee Dong Keun to prevail 18-21 22-20 21-11.

Meanwhile, two 31-year-olds stood out, showing the importance of skill and guile as they ousted younger Men’s Singles opponents to advance to round two. Holland’s Eric Pang and Thailand’s Boonsak Ponsana, veterans of many summers, outsmarted Guru Sai Dutt of India and China’s Gao Huan respectively. Both matches were long encounters, but eventually, creative skill and control saw the winners through.

Pang’s fluid movement and elegance contrasted with Dutt’s defensive style, but the Dutchman looked exhausted early. After a short pep-talk from his wife (former international Yao Jie), Pang dug in to take the opening game. The younger Indian however held the edge in the deciding game, with three match points. Pang’s ability to create openings helped him at this point; the most memorable of his strokes came on Dutt’s third match point when Pang caressed a shuttle to a corner beyond the diving Indian. Shortly thereafter, Pang (left) converted his own match point for a 21-18 11-21 23-21 triumph.

“I’m not very used to this (Superseries) level,” admitted Pang, who played 18 tournaments last year. “I’ve started playing the Superseries again only since October. In Holland there are not so many players of a high level… I try to train regularly. I feel my body gets down if I take a break, so that’s why I play a lot of tournaments. My wife’s advice was very important for me. She knows me quite well. She advised me on the direction of the wind.”

Ponsana wasn’t in as much trouble against Gao Huan, but at 75 minutes, it was a long match and the Thai used his resources efficiently during his 21-15 19-21 21-16 outcome. Like Pang, it was Ponsana’s craft – his touch at the net; his deception – that helped him overcome the age difference.

“Even though he is 31, he can match up because he is disciplined and follows the training programme,” said his coach Udom Luangphetcharaporn.

Another 31-year-old making light of his years was No. 1 and local favourite, Lee Chong Wei, who cheered up the crowd with a quick win over Denmark’s Hans-Kristian Vittinghus, 21-7 21-13.

* It was a fairly dismal day for the hosts who endured a series of losses, including Koo Kien Keat/Tan Boon Heong (7) and Hoon Thien How/Tan Wee Kiong (8) in Men’s Doubles and Liew Daren and Chong Wei Feng in Men’s Singles. However, in Mixed Doubles, sixth seeds Chan Peng Soon/Goh Liu Ying provided a bright spark for Malaysians with a 23-21 17-21 21-10 victory over Muhammad Rijal/Vita Marissa of Indonesia.