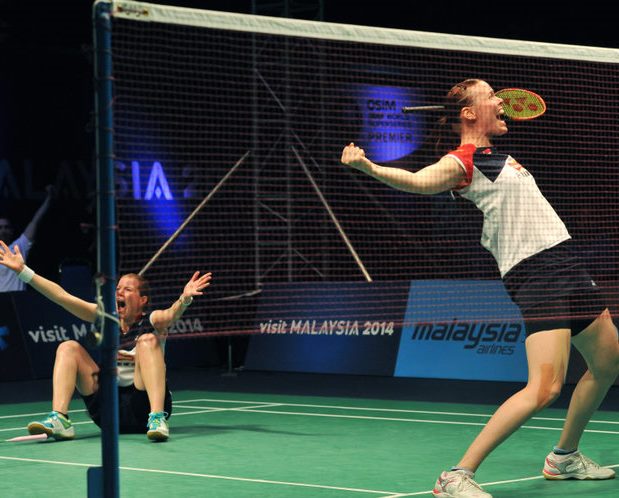 Christinna Pedersen was in the thick of the action in both finals – the Women’s Doubles (with Kamilla Rytter Juhl; BWF home page) and Mixed Doubles (with Joachim Fischer Nielsen; below) – as she pocketed a rare double; winning ten matches in five days! Impressively, today’s victories came at the expense of top Chinese pairs Ma Jin/Tang Jinhua and Zhang Nan/Zhao Yunlei respectively in front of animated horn-tooting, drum-beating spectators packed into Kuala Lumpur Badminton Stadium.

Four of the five matches were one-sided. Pedersen and Rytter Juhl had lost three previous matches to Ma Jin/Tang Jinhua but today was a different story. After a close first game, the Danes simply overwhelmed Ma/Tang, with Juhl in particular stunning them with powerful smashes. Nothing Ma or Tang did could change the flow as the Chinese went down 21-19 21-12 in 45 minutes. “The key was that our coach had asked us to step up and put pressure on them,” revealed Pedersen. “We’ve been in a few finals and we didn’t want to end as runners-up again.”

The Men’s Singles final was one-way traffic throughout. Even at his best, Indonesia’s Tommy Sugiarto hasn’t been able to take a game off Lee Chong Wei in six years. After stretching Lee to three games in their very first contest in 2007, Sugiarto has lost six subsequent encounters in straight games. Having played two exhausting matches over the last two days, Sugiarto was at a huge disadvantage against the quick-moving and hard-hitting world No. 1. The end came swiftly and clinically as Lee whipped Sugiarto 21-10 21-12 (below: presentation ceremony).

“I was a bit tired, but he was too good for me,” admitted Sugiarto, offering no excuses.

“I’m very happy because I’ve never won seven Superseries titles in a year,” said the winner, yet again bringing glory to his country. “It’s good for my spirits for next year.” Chinese Taipei’s Tai Tzu Ying (below; left), like Sugiarto, had survived a long match yesterday and there was little she could do to challenge the all-round prowess of Li Xuerui (below; right) in the Women’s Singles final. The tall Chinese never allowed Tai to get into the match. Unlike the semi-final against Wang Shixian, in which Tai could play a range of deceptive overhead shots, Li never let her opponent get under the shuttle. Tai’s precision was off and her shots were frequently wayward.

“I’ve not yet recovered my form of 2012,” said Li. “I’ve played well in the second half of this year, and I will try to recover my best form. This victory is a boost to my confidence…it has been hectic. The China league is up next, followed by the Korea Open, so there’s not much time to rest.”

Of her rival, who won the hearts of the audience, Li said: “Tai is a good player, she came from behind to beat Wang Shixian. There is a lot of room for improvement. I felt I was a bit lucky because I didn’t have a late-night match yesterday.” * The Mixed Doubles title match was as riveting as badminton gets, ending 12-21 21-19 21-10 in favour of Fischer Nielsen and Pedersen. Olympic champions Zhang Nan and Zhao Yunlei overwhelmed their opponents in the first game and through the early part of the second. It required something special for the underdogs to break down the formidable Chinese and Fischer Nielsen systematically achieved this as he flew around the court and fed off the crowd’s energy. The Danes’ momentum was so irresistible that by the third game, the Chinese started to crack under pressure, spraying their shots wide and helping their archrivals cruise to the title which they won last year. “I don’t know how many people we have to thank,” said Nielsen, conceding it was the noisy fans who inspired their incredible comeback.

* The Men’s Doubles final was a mismatch as Indonesia’s Mohammad Ahsan and Hendra Setiawan (below; in action and after presentation ceremony) were all over Kim Ki Jung and Kim Sa Rang of Korea, destroying them with perfect tactics. The World champions avoided fast and furious exchanges, opting instead for delicate pushes and dabs to frustrate the Kims who thrive on speed.

“We expected it to be tougher,” noted Ahsan. “Our performance has been a bit down after the World Championships and we’re proud to finish the year by winning the World Superseries Finals.”