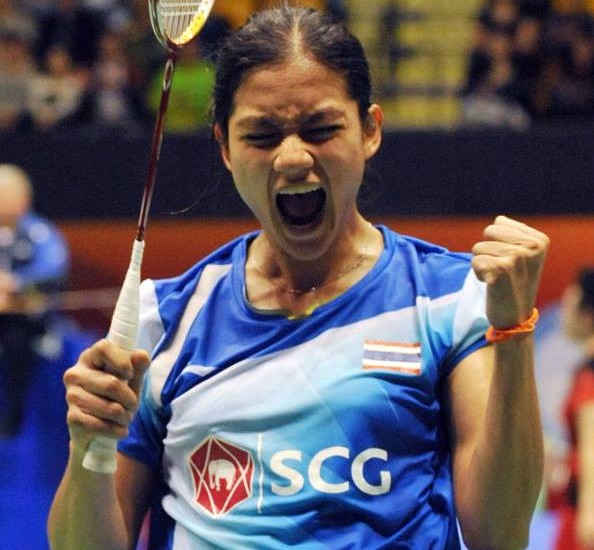 Porntip Buranaprasertsuk continued to be a thorn in Li Xuerui’s side, ousting the Olympic champion at the Yonex Sunrise Hong Kong Open 2013 today. The Thai player recorded her third straight win over Li, also the defending champion, in surprisingly authoritative fashion, 21-15 21-19. Buranaprasertsuk leads their head-to-head 3-2 and next plays Li’s compatriot, Wang Yihan, whom she beat last week at the Victor China Open. In the other semi-final, another top Chinese, Wang Shixian, takes on Japan’s Minatsu Mitani.

Buranaprasertsuk (BWF home page) was exceptional on all counts against Li, executing her strategy to perfection. She was not reluctant to engage Li in a physical battle; standing toe-to-toe, trading big shots and robbing Li of her usual style of dominating a match. What stood out was her aggressive intent as she refused to get cowed down by Li’s formidable attacking resources.

She did well to prevent Li from executing her trademark steep cross-court shots with her lifts down the middle. Buranaprasertsuk also injected pace into the rallies from time to time, using her jump smashes to pressure Li’s defence. There was a phase in the second game when Li asserted her dominance to lead 15-11 but, to Buranaprasertsuk’s credit, she refused to let the game go and levelled at 15. Li saved one match point but sent a clear long on the second.

Men’s Singles saw the exit of China Open finalist Wang Zhengming. The Chinese world No. 10 never looked convincing against Tommy Sugiarto (5) during a 17-21 21-9 21-12 loss. The world No.10 looked sluggish from the start, and although he took the first game, he was unable to dominate Sugiarto. The Indonesian played his usual defensive style and, as the match wore on, Wang appeared tired and unable to defend whatever Sugiarto threw his way. The latter easily pocketed the second and third games, clinching the issue on his first match point.

Men’s Doubles World champions Mohammad Ahsan and Hendrea Setiawan nearly self-destructed in their quarter-final against Russians Vladimir Ivanov/Ivan Sozonov. It was a peculiar match, with the Indonesian scratching through 21-15 14-21 22-20. Up a game, Ahsan/Setiawan appeared headed for a comfortable win, but they became sloppy in the second game, gifting away points with poor returns and mid-court lifts that the 6ft-5 Ivanov was able to nail easily. The match lit up with some thrilling rallies in the third game, and Ahsan/Setiawan took advantage of errors by Ivanov to go 20-18 ahead. Although the Russians saved two match points, the Indonesians were astute in the service situations, closing the match on their third opportunity. *Mixed Doubles top seeds Zhang Nan/Zhao Yunlei are the only defending champions left in the tournament. They nearly followed the other 2012 champions out the door, blowing six match points against Japan’s Hirokatsu Hashimoto/Miyuki Maeda, but composed themselves in time to survive, 17-21 21-10 22-20. Awaiting them in the semi-final are Chris Adcock/Gabrielle White (England). The other semi-final features Lee Chun Hei/Chau Hoi Wah (Hong Kong) against Liu Cheng/Bao Yixin (China; above).

* Women’s Doubles world champions Yu Yang/Wang Xiaoli (China, 1) have had a stunning year in which they have lost just three matches, the last being today’s quarter-final against their team-mates, Bao Yixin/Tang Jinhua. Japan’s Misaki Matsutomo/Ayaka Takahashi (3) await them in the semi-final. Ou Dongni/Tang Yuanting (China) are up against Christinna Pedersen/Kamilla Rytter Juhl (Denmark, 2; above) in the second semi-final.

* Men’s Singles top seed Lee Chong Wei continued to cruise through the draw. His latest victim was French Open champion Jan O Jorgensen (Denmark), 21-8 21-17. Boonsak Ponsana (Thailand) stopped another Dane, Hans Kristian Vittinghus 21-17 21-16, in their quarter-final and will have to overcome a 2-19 record against Lee if he hopes to make the final. Sony Dwi Kuncoro takes on Tommy Sugiarto in an all-Indonesian semi-final.