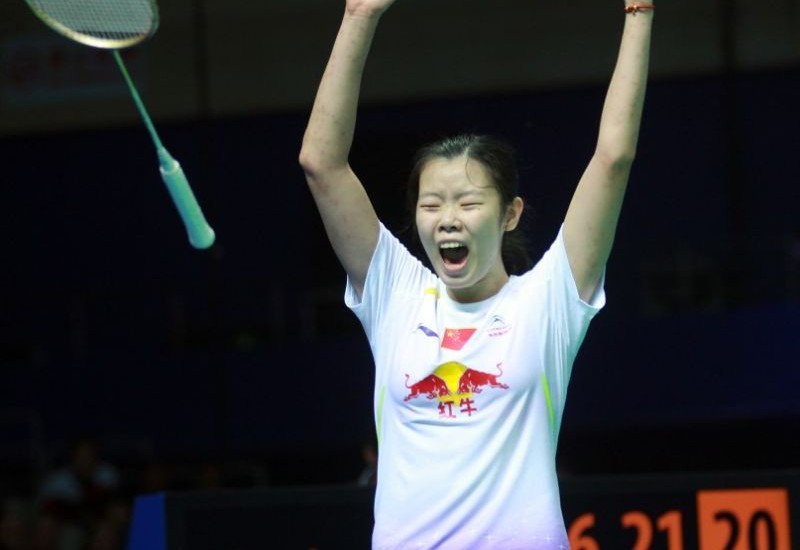 China’s three defending title-holders from a year ago all retained their crowns as the Victor China Open 2013 ended today.

Assured of the Men’s Singles, Women’s Singles and Women’s Doubles championships – with all-China battles – the host nation was only left to guess which of their players would ascend to the top of the podium in these events. Ultimately, it was the familiar faces of Chen Long, Li Xuerui and Yu Yang/Wang Xiaoli respectively; the same ones who walked away with the glory in 2012.

Meanwhile, Korea’s Lee Yong Dae/Yoo Yeon Seong emerged victorious in Men’s Doubles in the first match of the day before Indonesia’s Tontowi Ahmad/Liliyana Natsir brought curtains down on the tournament by taking the Mixed Doubles title.

Li Xuerui’s exuberant scream (BWF home page), as her compatriot Wang Shixian (at right; left) hit their last rally beyond the baseline, underlined how much the three-game outcome meant to her. Having endured an uncharacteristic spell of lean results highlighted by her loss in the World Championships final and a skin allergy that sidelined her last month, the Women’s Singles world No. 1 was thrilled to repeat her Superseries Premier success in Shanghai.

“I failed in the World Championships and I hope I can learn from that experience,” she said, crediting her aggression and strength for her 16-21 21-17 21-19 victory versus the Asian Games champion.

The two had a 2-2 head-to-head record going into the match and the game reflected the closeness of their standard. Wang dominated the early phase, dragging Li back and forth with deep tosses and sharp drops, but the Olympic titlist fought back level in the second game with her whippy attacking style. There were some brilliant exchanges throughout, with long rallies that tested both players’ resolve. Li edged ahead in the third, yet Wang was always within touching distance, and the match drew to a tense finish at 19-all. At the crucial moment, Li extracted a lift from the net which she killed deftly before Wang’s error sealed her demise.

Wang Zhengming (at left; left) , winner of the Adidas China Masters, gave a good account of himself in the Men’s Singles final; Chen Long (at left; right) though had the necessary artillery and experience to defeat the same rival who challenged him in last year’s final. Again it took a fight-back before the matter was settled, 19-21 21-8 21-14, to the senior player. The early proceedings unfolded sedately, with Wang working the shuttle around to create openings. The defending champion turned the match around in the second game as he injected power and pace. His explosive style changed the momentum completely and by the third game Wang Zhengming looked lost and bereft of ideas. The latter admitted as much, applauding Chen Long’s superior skills and ability to put him under pressure at crucia It was Chen Long’s third Superseries Premier conquest this year, following wins at the All England and Denmark Open. He will now look to cap the season by defending the Superseries Finals title he claimed last December in Shenzhen.

Women’s Doubles clash was a tussle between the youth of Bao Yixin/Zhong Qianxin and the experience of World champions Yu Yang/Wang Xiaoli (below: presentation). Bao has been in top form lately, with today’s outing being her fourth-straight final. The veteran pair, however, handed out a lesson to the juniors. Nothing that Bao or Zhong did could ruffle the fluency of Yu and Wang. The latter smashed powerfully from the back as Yu created openings in the front court to ensure a comfortable 21-13 21-7 rout lasting 31 minutes. “Because of injuries we haven’t won for a while so we’re happy to defend our title here and we hope we can give another good performance in Hong Kong,” said Yu referring to the next Superseries tournament.

Asked about their continued partnership which has survived the recent switches which have taken place among doubles pairs, she stated they want to remain partners as “the differences in our personalities and playing styles complement each other and we are very good friends”.

“We believe the team will respect our wishes, though it’s not only up to us.”

* Korea’s Lee Yong Dae and Yoo Yeon Seong didn’t have to wait long to avenge their French Open quarter-finals loss to Malaysia’s Hoon Thien How/Tan Wee Kiong (below). The new pairing that has set tongues wagging on the badminton circuit smashed their way – 21-13 21-12 – to their second Superseries Premier Men’s Doubles title in just two months together.

While they may have broken Malaysian hearts, the Koreans certainly earned fans’ respect for the clinical manner in which they executed their pre-game strategy to perfection, preventing Hoon and Tan from imposing their kind of flat game upon the match. Instead, Lee and Yoo pressured their opponents with high-intensity attacks and fell back to defending whenever necessary. The strategy gave their challengers nothing to work with and they faded without a fight. This was Lee’s sixth China Open and 29th career Superseries title.

“I’m happy to win this championship but it’s still too early to assess our performances. We need to wait a year before we can do that,” said Lee.

Tan Wee Kiong remained upbeat in defeat, stating “This is a big breakthrough for us. We never reached the finals before and, though we lost, being runners-up is a good result for us. The Koreans are more experienced and we reacted slowly at certain points.”

* Another dose of revenge was served up in the evening’s last match as Indonesia’s Tontowi Ahmad and Liliyana Natsir (below) won their fifth major title this year with a tense 21-10 5-21 21-17 Mixed Doubles result over Denmark’s Joachim Fischer Nielsen/Christinna Pedersen – the pair who denied them a bronze medal at last year’s London 2012 Olympics.

“Since losing that (Olympics) match, we aim to beat them every time we play them. We have been quite successful this year and it’s given us more confidence. We are going home to rest and prepare for the Superseries Finals because we want to end the year by winning that,” said the veteran dynamo, Natsir.

Fortunes fluctuated wildly in the first two games. World champions Ahmad and Natsir managed a narrow advantage in the decider but, with both Indonesians playing careless shots at crucial moments, the Danes edged closer. However, a poor serve from Fischer Nielsen to Ahmad saw the latter kill it and Natsir took care of business with a fine serve on match point.