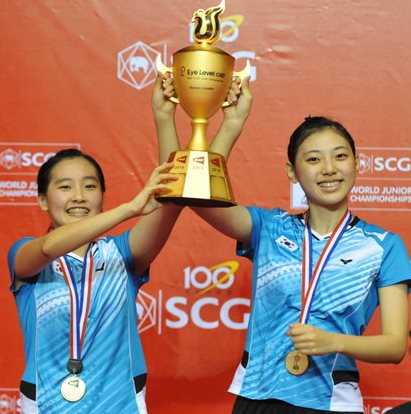 A week after celebrating victory in the team event, Korea wrested the Men’s Singles and Women’s Doubles championships in the individual Eye Level Cups competition at Hua Mark Stadium in Bangkok, Thailand. It marked a hat-trick of Women’s Doubles titles for Korea, following the repeat victories of Lee So Hee and Shin Seung Chan in 2011 and 2012. Including 2008 – when Singaporean pair Fu Mingtian and Yao Lei prevailed – this was only the fourth occasion since the inception of the BWF World Junior Championships in 1992 that a non-Chinese duo rose to the pinnacle of Women’s Doubles at the tournament.

Despite her Women’s Doubles’ loss, Chen partnered Huang Kaixiang to the Mixed Doubles crown (centre below: receiving trophy from BWF President Poul-Erik Høyer) over their Indonesian rivals, Kevin Sanjaya Sukamuljo and Masita Mahmudin. The hard-fought 21-18 20-22 23-21 result must have been a gratifying measure of revenge for the Chinese who fell to the Indonesians in the decisive match of their Suhandinata Cup semi-final the weekend before. In the last match of the day, Huang was unable to replicate his winning ways as he and Zheng Si Wei perished 14-21 21-13 22-20 to their Chinese team-mates, Li Junhui and Liu Yuchen, in the Men’s Doubles final.

Akane Yamaguchi of Japan – already a BWF World Superseries winner – stole the Women’s Singles spotlight, cruising to top place on the podium over her compatriot, Aya Ohori. Surely any lingering disappointment over losing last year’s final to another Japanese, Nozomi Okuhara, would have evaporated with Yamaguchi’s 21-11 21-13 blitz (centre below: Yamaguchi and presentation party). A number of officials from the Badminton World Federation (BWF) and the Badminton Association of Thailand attended the finals and presented prizes, including current BWF President, Poul-Erik Høyer, and immediate past BWF President, Dr. Kang Young Joong. Thanks to an incentive introduced by Dr. Kang, all medallists at the BWF World Junior Championships for the next 11 years will receive funding from the BWF President’s Fund, in the form of scholarships, to propel their badminton development. This year’s medallists are the inaugural recipients of those prizes.