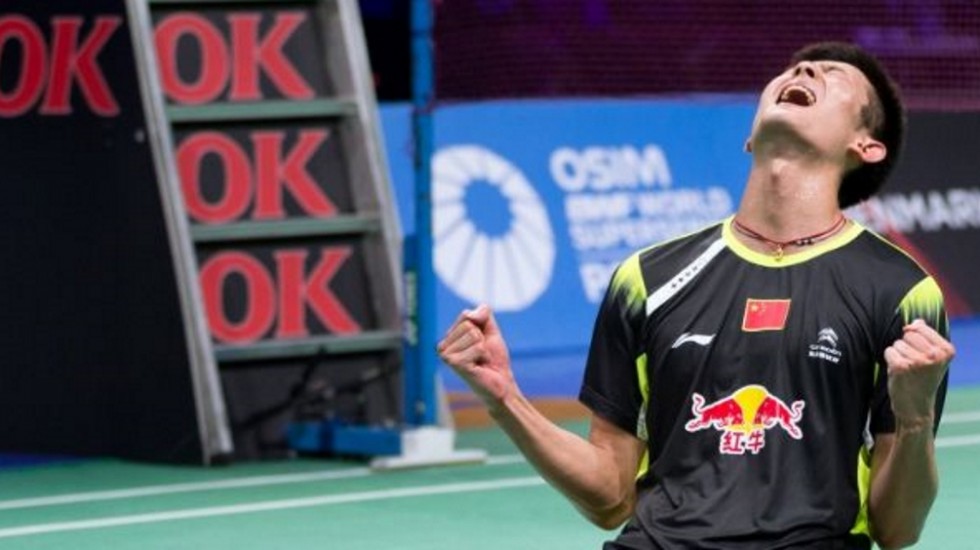 China enjoyed a perfect last day at the Yonex Denmark Open 2013 today, conquering the opposition in all four finals in which they competed.

Chen Long (2) and Wang Yihan (5), both former Denmark Open champions, regained their Men’s and Women’s Singles titles respectively. Zhang Nan/Zhao Yunlei (Mixed Doubles) and Tang Jinhua/Bao Yixin (Women’s Doubles; left) were the other cornerstones of China’s success. The only non-Chinese to grab a title were Particularly satisfying for the Chinese must have been the two singles victories. Both matches were of the highest quality and Chen and Wang showed their ability to navigate sticky situations. There was little to choose between the contenders in either final: Wang Yihan and Sung Ji Hyun in Women’s Singles or Chen Long (featured image) and Lee Chong Wei (Malaysia, 1) in Men’s Singles.

In fact, Sung Ji Hyun looked set to spoil Wang’s day. She cut through Wang’s defences in the first game with her heavily-sliced drop shots that helped her recover from 9-15 to win 12 of the next 13 points, but Wang recovered in the second and it became a contest of high and precise tosses, sharp drop shots and incredible athleticism. Sung had the advantage in the third game at 17-13, but yet again Wang scrambled her way back by setting up her attack with net shots that forced Sung to lift the shuttle and present her opponent with opportunities to smash. The 16-21 21-18 22-20 victory was Wang’s second Superseries title of the year.

“Playing here has given me good results,” noted Wang (right), thanking her supporters in the audience. “I hope I can do the same at next year’s World Championships (in Copenhagen).”

On the eve of his 31st birthday, Lee Chong Wei faced Chen Long for the first time since his All England loss to the Chinese. Unfortunately, despite a sterling effort, the Malaysian top player could not gift himself a present to remember. The match was played at an electric pace, with spectators gasping at the stunning returns of smashes, the tightness of the net play, and retrievals from near-impossible positions. After a tight first game, Lee got erratic in the second, helping Chen to leads of 12-5 and 17-12. To his credit, Lee fought back into reckoning and levelled at 18. However, another wayward shot gave Chen match point which he wasted no time converting for a 24-22 21-19 result.

“I cherish the opportunity to play Lee Chong Wei. It motivates me,” said the victor. “I feel we both are winners today and I look forward to playing him again.”

* Indonesia had two World champion pairs in the finals, but both faltered. Men’s Doubles partners, Mohammad Ahsan and Hendra Setiawan, suffered their first loss in a Superseries after a 19-match unbeaten streak. The Indonesians were uncharacteristically lacklustre, with Lee Yong Dae and Yoo Yeon Seong (centre below) keeping them under pressure from the opening rally. Ahsan, suffering a shoulder injury, was unable to attack with his usual high-flying gusto and the Koreans romped to a sweet 21-19 21-16 victory.

“I don’t want to offer excuses but my right shoulder was hurting,” said Ahsan, who rubbed and flexed his rotator cuff during the match.

Regarding his new partnership with Yoo Yeon Seong, a beaming Lee Yong Dae declared it has worked wonderfully so far and complimented Yoo’s “power and speed”. Yoo repeated his Danish success, having captured the same title last year with Shin Baek Choel. * Mixed Doubles World champions Tontowi Ahmad/Liliyana Natsir also appeared below their best and were inconsistent against Olympic champions Zhang Nan/Zhao Yunlei (centre below). They paid the price, losing 21-11 22-20. The first game was unusual as the Chinese strung up 12 straight points, from 5-8 down to 17-8. Ahmad and Liliyana had an opportunity to level things with a 20-17 lead in the second game. Yet again they stumbled and, five points later, the Chinese were celebrating another title.

* Denmark’s only hope in the finals, the Women’s Doubles pair of Christinna Pedersen/Kamilla Rytter Juhl, was outplayed by Tang Jinhua and Bao Yixin. Despite the vociferous crowd urging them on, Pedersen and Rytter Juhl were unable to ride on its energy, and surrendered tamely, 21-16 21-13. Like Yoo, Tang Jinhua was a repeat winner with a different partner, having triumphed with Ma Jin in 2012.