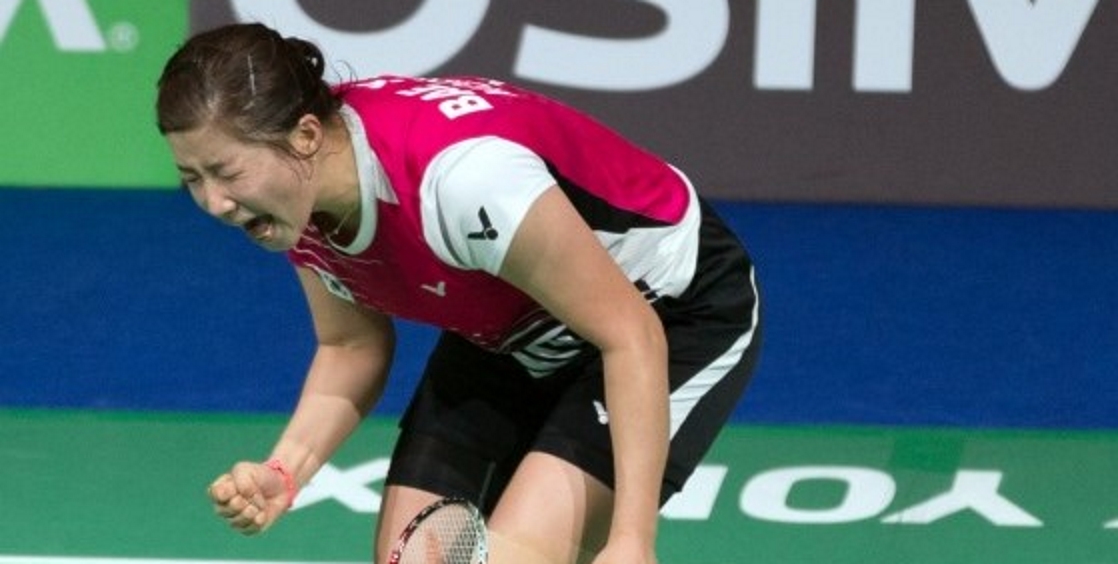 Germany’s Juliane Schenk, runner-up at last year’s Yonex Denmark Open, crashed out of this year’s tournament in the second round today in Odense.

The Women’s Singles third seed began comfortably against Korea’s Bae Yeon Ju, winning the first set and leading 11-7 before the Korean caught up and turned the match. The 19-21 21-17 21-17 victory gives Bae (featured image) the opportunity to play Denmark Open 2010 champion Wang Yihan of China in the quarter-finals.

Another seeded casualty was Kenichi Tago of Japan in Men’s Singles. The fourth seed, who has enjoyed a spell of good form lately, fell to the resurgent Sony Dwi Kuncoro. The former top-ten ranked Indonesian has been patchy this year, alternating some good campaigns with several poor ones, but against Tago he put up his ‘A’ game and sealed the match in straight games, 21-16 21-18.

“I started fast and aggressive and pushed Tago back in the first game,” Kuncoro said. “In the early part of the second, I lost my concentration and had to fight back to win. For me, it’s not just about doing well here but to continue my form into the next few tournaments.”

No. 2 seed Chen Long (China), winner of the 2011 edition, flirted with danger against Rajiv Ouseph (England). The Englishman, who plays a languid style, had Chen in all sorts of trouble with his deceptive play. Ouseph refused to give Chen the pace at which he revels, and his soft pushes and drops upset the former champion’s rhythm. Up a game and 19-16, Ouseph (right) was two points from a stunning upset, but Chen was tactically astute when it mattered, and it was Ouseph who was left wallowing in defeat – Chen pulling through 19-21 22-20 21-16 in 80 minutes.

Among the most entertaining matches of the day was the Women’s Doubles victory by Marie Roepke/Line Damkjaer Kruse of Denmark (centre below) over China’s Ma Jin/Zhong Qianxin. The tall Roepke in particular inflicted a lot of damage with her steep smashes as the home pair celebrated their triumph: 22-20 16-21 21-15.

Although the Chinese levelled a first-game deficit and earned a small lead at 10-8, the Danes kept themselves in the hunt through strong all-round play. The second game had seen Zhong gain the advantage with her powerful smashes, and Denmark turned the tide by drawing her to the net and forcing Ma Jin to play from the back. The tactic upset the rhythm of the Chinese, and the Danes steadily built the advantage from midway in the third game. Kruse showed no nerves in serving under pressure as the Danes closed out the match with a Roepke smash.

“This is one of our best wins,” said Roepke.  “It’s fun to beat any Chinese pair. Initially, we didn’t keep Ma Jin away from the net, but once we made her play at the back it worked for us.”

* Danish Mixed Doubles pair Anders Kristiansen and Julie Houmann haven’t progressed beyond the first round in four of their last five tournaments, but they halted that slide on home court, recovering from a game down against Hirokatsu Hashimoto/Miyuki Maeda of Japan to prevail 9-21 21-18 21-18 and earning a chance to play World champions Tontowi Ahmad/Liliyana Natsir (Indonesia, 3) in the quarter-finals.

* Hirokatsu Hashimoto was also involved in a long Men’s Doubles match earlier in the day. Hashimoto and Noriyasu Hirata (centre below) had a 17-11 lead in the third game against Ko Sung Hyun/Shin Baek Choel (Korea, 7), but Korea took five points in a row and inched close at 19-20 before the Japanese won, 21-12 17-21 21-19.