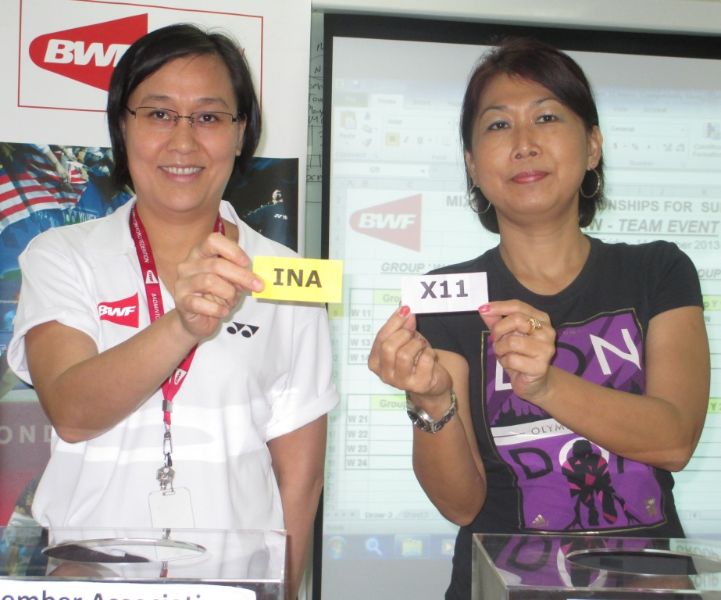 Defending Suhandinata Cup champions and top seeds – China – have been pitted against Australia, Singapore and Spain in sub-group W1 for the round-robin Meanwhile, following today’s draw (featured image) at the Badminton World Federation office in Malaysia, No. 2 seeds Korea will face Algeria, India and South Africa in Group Z1 action. Indonesia headlines Group X1 and will have to get by France, Sri Lanka and the USA in the opening stage. Japan, seeded joint 3 and 4 with Indonesia, has been placed in Group Y1 with Finland, Germany and Kazakhstan.

In sub-group W2, Chinese Taipei will oppose the Czech Republic, Russia and Uzbekistan while in sub-group X2 Malaysia is drawn against Bulgaria, the Philippines and Scotland. The final two sub-groupings are: Y2 which contains Botswana, Canada, Denmark and Thailand and Z2 with Armenia, Hong Kong, Turkey and Vietnam.

The battle for the Suhandinata Cup – the ultimate quest in junior team badminton – gets underway on Wednesday 23 October in Bangkok, Thailand, with 32 BWF Member Associations vying for glory in 96 matches. At the conclusion of the Suhandinata Cup competition, the individual World Juniors segment for EYE – Level Cups will take place. The draw for the individual phase of the tournament will be done in Bangkok.

The draw for the Mixed Team Championships for the Suhandinata Cup