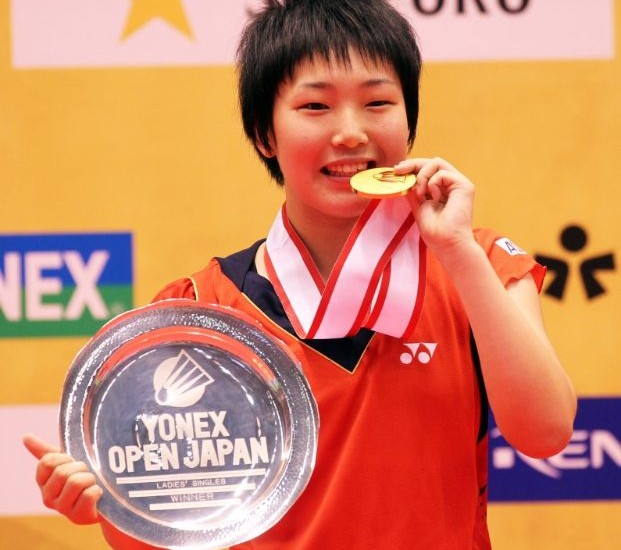 The 16-year-old capped a fairytale run at the event, beating Shizuka Uchida 21-15 21-19 in an all-Japanese final. The two finalists had already created history a day earlier by ensuring the first-ever title for Japan in the event’s 32-year history.

Yamaguchi’s triumph was the culmination of an extraordinary journey through the week, as the schoolgirl, ranked 145, survived two qualifying rounds and brought down far more accomplished players, such as eighth seed PV Sindhu (India) in the second round and defending champion Tai Tzu Ying (Chinese Taipei, 6) in the semi-finals. Against her final opponent Shizuka Uchida, Yamaguchi sped off the blocks with her fast and powerful game. It was only for a brief period in the second that Uchida was able to dictate terms, but Yamaguchi repaired the deficit and edged through for a memorable victory.

Lee Chong Wei had a 13-0 record against Kenichi Tago heading into his Men’s Singles final, including victories in four Superseries finals. The Japanese, however, gave a fine account of himself and forced the top seed to come up with his very best. The match saw some big punches and counter-punches from both ends, with Tago leaping high at every opportunity to send his powerful smashes crashing down. Lee kept himself in the hunt with his high-quality defence, but Tago’s sustained intensity saw him earn three game points at 20-17. The champion’s indefatigable qualities came to the fore at this point; his explosive smashes homed in with accuracy, and Tago found himself a game adrift.

Watched by his mother, the former international Yoshiko Yonekura, Tago had a narrow advantage at the mid-game interval in the second, but a few errors proved costly and he was unable to keep the pressure on Lee the way he had done in the first game. A final body smash helped the champion retain his title.

Mohammad Ahsan and Hendra Setiawan pocketed their fifth major title this year after a tense Men’s Doubles final against China’s Chai Biao/Hong Wei. Although the Indonesians were overwhelming favourites, the Chinese very nearly upstaged them. The first game in particular was a neck-and-neck battle; Setiawan, who usually controls the net, was not allowed to create openings as he normally does. Mohammad Ahsan however compensated admirably, as he frequently jumped high to smash and followed through to the net. Despite a shaky Setiawan erring on his serves a few times, Ahsan’s sustained effort saved the day for the Indonesians.

* Ma Jin and Tang Jinhua (China, 1) won their first title this year with a clinical victory, 21-11 21-14, over Christinna Pedersen/Kamilla Rytter Juhl (Denmark, 3) in the Women’s Doubles final. With Ma creating openings at the net, and Tang patrolling the back, the Chinese were never threatened by the Danes, who had a few mix-ups in the match.

* Zhang Nan and Zhao Yunlei (China, 2) received a walkover from Xu Chen/Ma Jin (China, 1) in the Mixed Doubles final for their fourth Superseries title this year. Zhang/Zhao improved their record over Xu/Ma to 14 wins against just two losses.