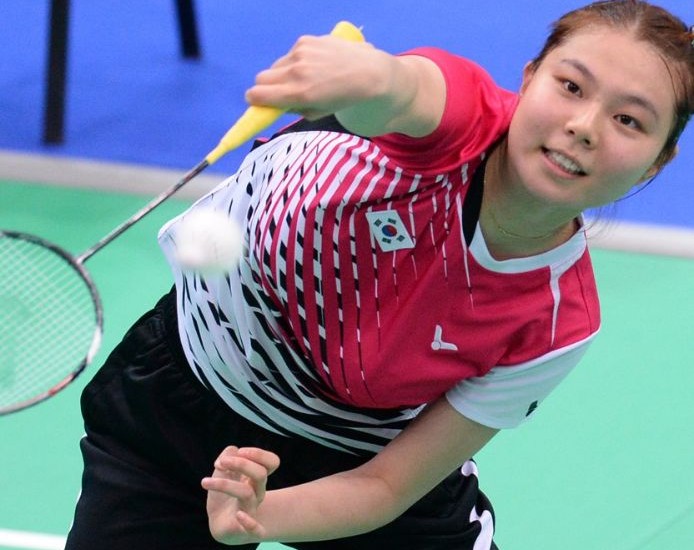 Kim So Young celebrated her 21st birthday belatedly with a coming-of-age performance, copping two of the four gold medals which Korea won in individual competition at the 27th Summer Universiade in Kazan yesterday.

Justifying their top billing in badminton at the event, Korea’s star-studded line-up took top honours in each final they contested – with Kim (BWF home page) featuring in Mixed Doubles with Kim Ki Jung and in Women’s Doubles with Chang Ye Na.

As the curtains fell on badminton in the Russian city, China was shut out of gold-medal glory with Thailand’s, Tanongsak Saensomboonsuk (below; second left), capturing the lone gold for which Korea was not in contention. He thwarted Chinese hopeful, Gao Huan, in the Men’s Singles finale – 21 12 21 17. Other than this match, the last day of the week-long event at the Tennis Academy belonged to Korea who showed off their prowess across the various disciplines. Following Saensomboonsuk’s success, the Korean onslaught continued with Kim returning to the court with Chang in a quest for the Women’s Doubles title. It was not an easy task as they found themselves locked one-all in games versus Luo Yu and China’s Olympic Women’s Doubles champion Tian Qing who – having already lost out to Kim in the Mixed showdown – was trying to avoid the same fate again. However, the Koreans (presentation; bottom centre) dug deep and found that extra resolve to clinch gold – 27-25 15-21 23-21.

In the final match of the tournament, the imposing home pair of Vladimir Ivanov and Ivan Sozonov – the No. 2 seeds – battled top seeds and world No. 1 duo of Ko Sung Hyun and Lee Yong Dae.

Russian fans must have been savouring victory in Men’s Doubles when their players grabbed the first game for the loss of 13 points. However, the explosive Koreans showed their mettle, storming back to seize the remaining games.

Thrilled with their 13-21 21-13 21-13 triumph, they ensured the last gold medals would be dangling from their necks (presentation; centre below).

For full results from the individual badminton competition at the 27th Summer Universiade in Kazan, please click here.