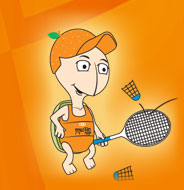 Badminton will score another enviable first tomorrow – making its debut in the Mediterranean Games in Mersin, Turkey.

It will be a proud moment for the badminton community when the first shuttle is served at Mersin University Sports Hall No. 1 which will host badminton until Isabelle Jobard is the tournament referee and she has Ivanka Pokorni as her deputy. The Badminton World Federation has appointed Badminton Malta (and COMEBA) Secretary General John Attard as the technical delegate for the tournament.

Officials from the Confederation of Mediterranean Badminton (COMEBA) will be especially pleased to witness the start of the badminton as that organisation has worked tirelessly to achieve this goal. They received valuable support from the Turkish Badminton Federation.

Formally reconstituted in July 2006 by the Italian Badminton Federation and its president Alberto Miglietta (current Vice President of Badminton Europe) after some years of inactivity, COMEBA set itself two priorities, one of which was the introduction and integration of badminton in the Mediterranean Games.

The other is the promotion and development of badminton within the countries of the Mediterranean basin through the organisation of training camps – particularly for junior players and their coaches – as well as through healthy competition in a spirit of friendship and fairness, free from performance-enhancing substances.

The Mediterranean Games, which began on 20 June, are a multi-sport event held every four years. Countries bordering the Mediterranean Sea – the meeting point of three continents (Europe, Africa and Asia) – participate in the sporting spectacle as a means of building social and cultural rapprochement. Olympic rules apply and competition ends in 13 days.

First held in 1951, the Games are now celebrating their 17th edition. Most of the 32 sporting disciplines are taking place in the host city, Mersin. The official logo (right) of this edition features a loggerhead sea turtle (caretta caretta) getting out of sea, with water underneath it. An orange is shown above its back, representing the dry summer subtropical climate of the Mediterranean.

“Karetta” the turtle is the official mascot of the Mersin Games and is depicted on the Games’ sports pictograms (BWF home page and at left).

For further information on the Mediterranean Games 2013 in Mersin, please click here.