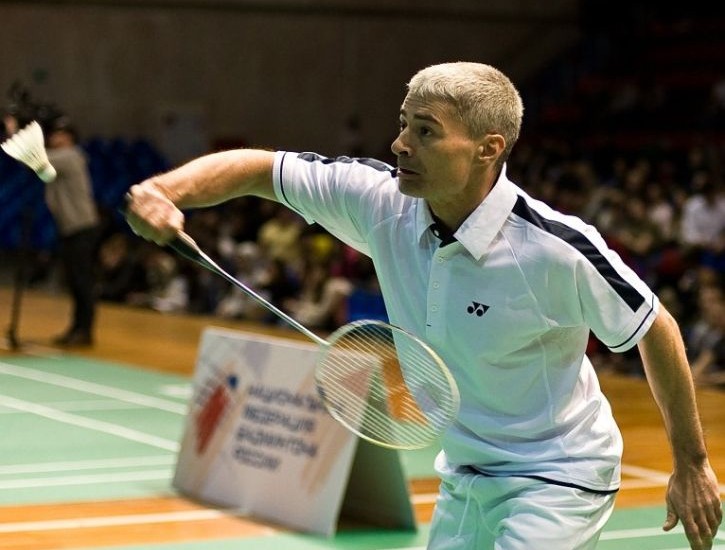 Russian cosmonauts are still the champions in the battle of the ‘space shuttlers’!

The foursome of Gennady Padalka, Aleksandr Skvortsov, Andrey Borisenko and Maksim Surayev (right) defended the badminton title which they first won a year ago versus rival American astronauts when the two teams clashed in Moscow on Wednesday 27 February.

Playing badminton has been a long-standing tradition in the Russian space program, starting with the first outer space squad. The sport is considered beneficial in numerous ways, including being great physical exercise; having low risk of injury and being good for sharpening one’s eyesight, eye-hand coordination and reaction speed.

For some time now, the National Badminton Federation of Russia (NBFR) has been hosting an annual tournament, “Space Shuttlecock”, in Star City which is home to the Cosmonaut Training Center. Last year, the Russians decided to spread their badminton initiative and invited their American colleagues to compete against them for the inaugural Star Call Cup. This battle featured Russian cosmonauts and astronauts from the National Aeronautics and Space Administration (NASA).

The Russians inflicted a crushing defeat on their rivals and the two sides agreed on a rematch this year. The result was the same last month with Russia winning all four matches. NASA was represented by Mark Thomas Vande Hei (BWF home page), Kimiya Yui, Jennifer M. Long and Takuya Onishi.

“I have been in cosmonautics since 1989 and been playing badminton since around the 1990s. It is a very good game for cosmonautics. It helps to develop coordination, reaction. I really liked playing with our American colleagues last year. It was interesting. I know there are strong players in NASA’s team so we could not take it easy,” said Gennady Padalka.

Click here to view news report on the rematch (in Russian) and see presentation ceremony below.

Meanwhile, earlier in the day, Rangsikitpho met with President of the Russian Olympic Committee (ROC) Alexander Zhukov to discuss a number of initiatives, such as the prospect of Sochi – host city for the 2014 Winter Olympics – staging a major badminton tournament in the future. NBFR President and BWF Council Member Sergey Shakhray and NBFR Chairman Andrey Antropov also attended that meeting.