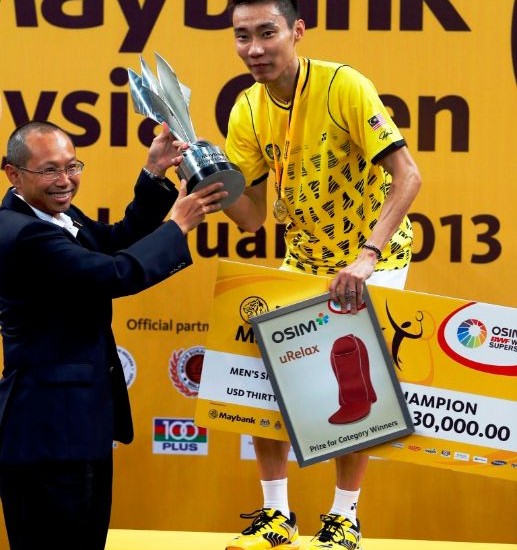 Showcasing his expansive repertoire of shots and skills, Lee Chong Wei sped to his ninth home title today, bringing the Maybank Malaysia Open to a perfect crescendo for his adorning fans.

While the world No. 1 reigned supreme at Putra Stadium – trouncing familiar rival Sony Dwi Kuncoro of Indonesia 21-7 21-8 in the Men’s Singles final – Chinese Taipei’s teen prodigy, Tai Tzu Ying (top right), again hinted strongly that she too may someday ascend to badminton royalty. She opened the afternoon’s proceedings by sweeping to the Women’s Singles crown with a convincing 21-17 21-14 performance against Chinese challenger Yao Xue. It was the 18-year-old’s second Superseries title and a great start to her 2013 campaign. In one of the most lop-sided Superseries finals ever, Lee’s conquest marked his 30th Superseries championship and 46th title overall. Kuncoro had a 5-7 record against the top seed going into the final, but the Malaysian (BWF home page) was almost flawless when it mattered most. His tremendous speed and agility and the quality of his jump smashes left Kuncoro constantly scampering. Anything the Indonesian tossed was smashed thunderously; when he tried to play the net, Lee lunged forward and extracted a lift.

The rout, completed in 32 minutes, was greeted by outbursts of celebrations; drums, horns, whistles and voices in deafening accord.

In the Women’s Singles final, Tai justified her immense promise, unleashing a range of strokes to leave Yao bemused. Just as she had dismantled top seed Saina Nehwal’s challenge in the semi-finals, Tai spun a web around Yao. The Chinese challenger had no idea how to counter the deception, control, and unpredictability of her opponent’s strokes. Tai was particularly effective at the net, frequently sending Yao the wrong way with her delayed shots. So helpless did Yao seem in the first game that she smiled wryly as Tai left her rooted to the middle after yet another trick shot. The lack of confidence showed, as the world No. 151 sent several tosses long in the first game, and Tai went ahead comfortably. The second game followed the same pattern. Yao did serve a sample of her game and was impressive in patches. Standing about a foot taller than Tai, Yao used her height advantage to unleash some stinging smashes, but once her rival started reading them, the end was inevitable.

Olympic bronze medallists Joachim Fischer Nielsen and Christinna Pedersen (Denmark, 2) broke the hearts of the Malaysian crowd by beating local pair, Chan Peng Soon/Goh Liu Ying, 21-13 21-18 in the Mixed Doubles showdown. The Malaysians were outclassed by the harder hitting of the Danes and were never allowed to get into the match. The difference between the two sides was Pedersen who dominated the forecourt exchanges. Although Fischer had bad spells in both games, the Danes (bottom right) held steady when it mattered, especially on their low serves which were so tight that the Malaysians could not put them under pressure.

• The new combination of Bao Yixin/Tian Qing (China, 5) won the Women’s Doubles, beating Misaki Matsutomo/Ayaka Takahashi (Japan, 2) 21-16 21-14. Bao and Tian (bottom centre), who were with different partners, came together this year and have now notched their first Superseries title as a pair.

• Indonesia’s Mohammad Ahsan and Hendra Setiawan (top left) caused the biggest surprise of the day by upsetting Ko Sung Hyun/Lee Yong Dae (Korea, 6) in the Men’s Doubles final, 21-15 21-13 in just 30 minutes. This was the Koreans’ first loss in six tournaments.