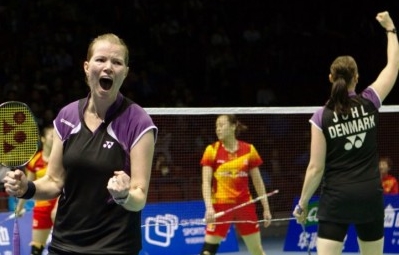 Denmark’s Christinna Pedersen has a busy Sunday ahead of her as she hunts two Doubles championships at the CR Land BWF World Superseries Finals tomorrow.

She and Women’s Doubles partner, Kamilla Rytter Juhl (featured image), stood tall in Shenzhen Bay Sports Center tonight to turn back the titanic challenge of Olympic gold medallists, Tian Qing and Zhao Yunlei of China. The latter was also gunning for a Doubles double at the year-end spectacle – to match her feat at London 2012 this past summer. Yunlei and Pedersen had already booked an appointment to meet across the net – with their respective Mixed Doubles partners – to decide that title.

Now, it’s Pedersen who has a second opportunity at glory – earning it the hard way. After losing a tight first game 19-21 to their host arch-rivals, the Danish women were 16-18 down in the second game. Tian/Zhao looked heading for a comfortable semi-final victory. Suddenly, Pedersen and Juhl shocked them by reeling off the next five points to force a third game.

That proved a close affair, with neither team able to establish a decisive lead. Finally, the Danes had three match points at 20-17, but Tian and Zhao fought level and snatched two match points of their own. Pedersen and Juhl kept focus to eventually prevail

There were two more instalments of the China-Denmark duel. Defending Men’s Doubles champions, Denmark’s Mathias Boe/Carsten Mogensen had to summon all their experience, resolve and guile to withstand young talents, Hong Wei and Shen Ye (right). The Chinese had three chances to seal the opening game at 20-17 and three more after 20-all, but their opponents refused to give up and clinched the game 26-24. The pattern reversed in the second game, with Hong and Shen saving three match points before taking the game 26-24.

The match seemed poised for a climactic finish, but Boe and Mogensen’s superiority came to the fore and they emerged from the smash-fest 26-24 24-26 21-15.

There were initial fireworks in the post-midnight semi-final between Hans-Kristian Vittinghus (top left) and Du Pengyu. The Dane captured the first game but Du was not to be denied, powering home 21-23 21-8 21-13, to the delight of faithful hometown fans who remained until the Men’s Singles match finished just before 1 a.m. • Men’s Doubles second seeds, Hiroyuki Endo and Kenichi Hayakawa of Japan (right), must have been surprised at the early end of their semi-final over favourites Cai Yun/Fu Haifeng. The world champions retired in the first game at 9-13 down as Cai suffered the recurrence of a waist injury.