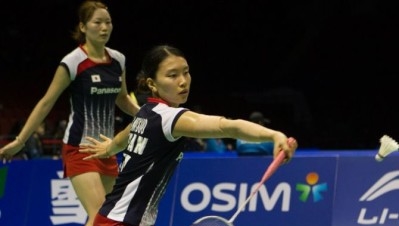 Japan’s Men’s and Women’s Doubles pairs performed impressively this afternoon to romp towards the semi-finals of the CR Land BWF World Superseries Finals.

Second seeds in Men’s Doubles, Hiroyuki Endo/Kenichi Hayakawa (below) came through easily against Thai partners Bodin Issara/Maneepong Jongjit in Group B. The Japanese took just 18 minutes to win 21-11 21-9. Endo and Hayakawa have thus sealed their place in the semis, along with China’s Hong Wei/Shen Ye (below) as both have registered two victories each. In Women’s Doubles at Shenzhen Bay Sports Center, top seeds Shizuka Matsuo/Mami Naito (Japan) were pushed to the brink by another Thai pair, Duanganong Aroonkesorn and Kunchala Voravichitchaikul. However, the Japanese (featured image) prevailed 21-11 18-21 21-19 in an hour and 18 minutes.

Unfortunately for Japan, their singles players could not join their compatriots in winners’ row. World No. 5 Kenichi Tago surrendered tamely to No. 23 Hans-Kristian Vittinghus 21-18 21-13 in a Men’s Group B encounter. On the women’s side, veteran Eriko Hirose tested top seed Li Xuerui (China) in the first game, even having a game point. Steely Li rose to the • Thailand’s Ratchanok Intanon celebrated her maiden win over world No. 3 Saina Nehwal after three successive losses. The 17-year-old played maturely to wrest the Women’s Singles Group B match 21-13 21-16. It was Nehwal’s second straight loss in the year-end event.