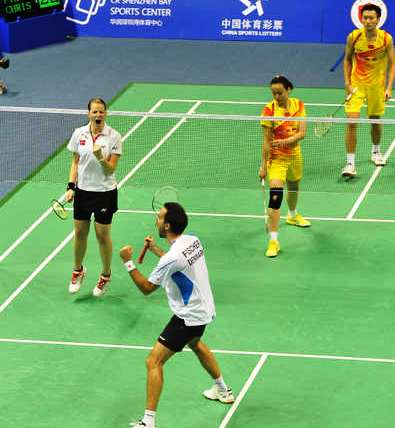 The Group B Mixed Doubles match, which saw the No. 6 Danes upset the Olympic gold medallists from China 21-12 23-21 (featured image), was one of two great results for Europe on the first day of the tournament, being played at Shenzhen Bay Sports Center, China.

The other was veteran Tine Baun’s surprise victory over world No. 3 Saina Nehwal (India) in a Women’s Singles, Group B clash. Denmark’s Baun (left), who has lost to Nehwal in their last four matches, reversed the trend with a gutsy 21-14 11-21 21-19 success. In the third game, the Indian rallied from 8-14 to come within a point at 13-14, but a determined Baun shot ahead again and closed the door firmly.

Also in that group, world No. 4 Juliane Schenk (Germany) continued to struggle against Thailand’s Ratchanok Intanon (right). She suffered her third straight loss to the world No. 9, 21-17 22-20. Hans-Kristian Vittinghus raised hopes of a Danish hat-trick in the night session – and indeed of an upset against Chen Long (China) – snatching the first game 22-20. However, the second seed rebounded to claim the remaining games at 15 and 11 in their Men’s Singles fixture.

• The shortest match today was the Group B Men’s Doubles tie between Hong Wei/Shen Ye (China) and Maneepong Jongjit/Bodin Issara (Thailand). The Thais were dismissed 21-9 21-9 in just 21 minutes!