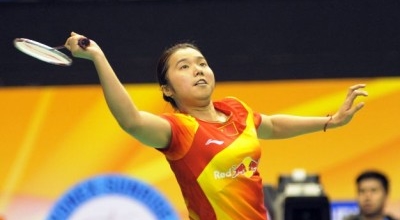 It was a flawless Friday for China as they won each of their quarter-final matches at the Yonex Sunrise Hong Kong Open today.

All the top contenders – including four Olympic champions – cruised into the semi-finals, their dominance spread equally in singles and doubles. While they grabbed three of the four semi-final spots in the Women’s Singles and Women’s Doubles, the Men’s Doubles and Mixed Doubles will see two Chinese pairs each. Former Women’s Singles world champion Wang Lin (China), who came through qualifying and beat third seed Saina Nehwal (India) in the second round, continued her impressive march as she sealed a semi-final place after beating Indonesia’s Adriyanti Firdasari 21-12 21-19. She will play Olympic champion Li, who received a walkover from injured Dane, Tine Baun.

The only Chinese to face some trouble was Women’s Singles world No. 1 Wang Yihan, who was stretched by Chinese Taipei’s Pai Hsiao Ma in a 20-22 21-11 21-16 victory. Wang appeared bothered by her heavily-strapped right knee, and was repeatedly caught near the net as Pai took the first game. She stormed back to take the second rather easily; the third was a slugfest of long rallies. Pai showed great heart and retrieving ability, but Wang’s long reach and steepness of strokeplay kept her in the hunt despite trailing 4-9. After she caught up at 10, Wang steadily pulled ahead, but it was tougher than the 21-16 score suggested.

She will take on Germany’s Juliane Schenk (right) – who beat her last week at the China Open semi-finals. Schenk (4) packed too many weapons for Thailand’s Porntip Buranaprasertsuk who, despite skilful strokeplay and grace of movement, was overpowered by the hard-hitting German 21-16 21-16.

“Porntip is always a dangerous player,” said Schenk. “It’s a big challenge to beat her. I’m thankful for my performance here. It’s perfect. I’m at peace now, and not thinking yet about Wang Yihan. At this stage you just enjoy the rallies. I was relieved when I converted match point. I’ve been playing six weeks in a row, and it’s great that the body is carrying me along.”

The German has reached the semi-finals or higher of each of last four Superseries: the Singapore Open (that she won), Denmark Open (final), French Open and China Open. There was a slim chance her German compatriot Marc Zwiebler might join her in action on semi-finals day – but it was not to be. Zwiebler fell in an hour-long battle to Indonesia’s Tommy Sugiarto 21-17 19-21 21-17. The contest was even for most of the match, with Sugiarto showing glimpses of the stout defence for which his father, 1983 world champion Icuk Sugiarto, was famous. Besides his defence, the younger Sugiarto also packs a sharp smash, and he used it well to breach Zwiebler’s defence. The left-handed German opened up a marginal lead early in the deciding game, but from 14-all, Sugiarto steadily gained over him. Zwiebler admitted that he hadn’t felt his best during the match.

“I was maybe too tired, I just didn’t have the right feeling,” he said. “I don’t know what happened. I would’ve loved to play Chen Long in the semi-finals…but it’s okay, I am satisfied with my performance here.”

Europe’s only other hope lies with Mixed Doubles exponents, Joachim Fischer Nielsen and Christinna Pedersen of Denmark (left). They advanced to the semis, overcoming Indonesian pair Fran Kurniawan/Shendy Puspa Irawati 23-21 21-8. The Malaysian duo of Chan Peng Soon and Goh Liu Ying are also in with a shout, having beaten Yoo Yeon Seong and Jang Ye Na of Korea, 23-25 21-16 21-15.