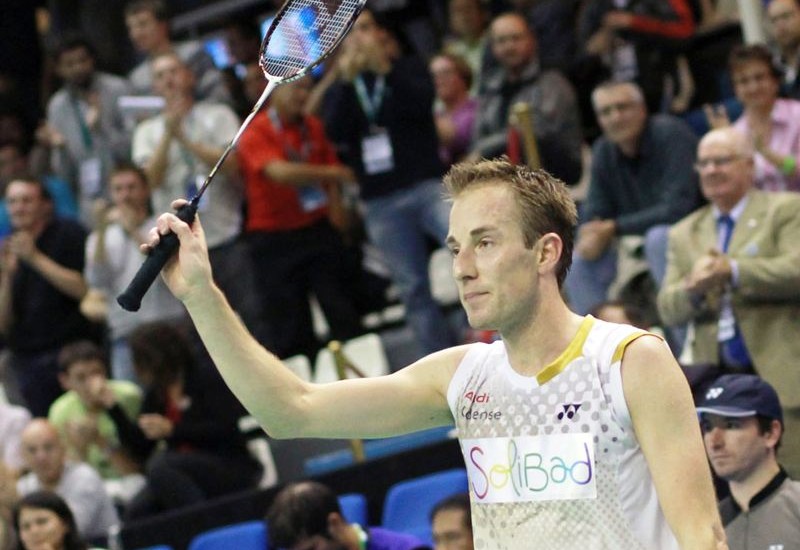 One of badminton’s greatest careers ended at the French Open today – former No. 1 Peter Gade bidding goodbye to the sport after losing to compatriot Jan O Jorgensen 21-18 17-21 15-21. Gade had a stellar career in which he won several global titles, including the All England championships in 1999. He was also runner-up at the World Championships in 2001.  Despite being at the end of his career, he nearly pulled off a quarter-final victory against his much younger countryman.

Midway through the second game, it looked like Jorgensen (pictured left, at left with Gade) was heading for an embarrassing defeat. Gade had stolen the first game from under his nose – Jorgensen had an 18-13 lead but Gade won the next six points and carried that momentum into the second game. At 14-9, it looked like the veteran could still cast a spell over his challenger but, to Jorgensen’s credit, he changed tactics, directing his attack on Gade’s body, and caught up at 15. The veteran’s accuracy began to waver and his steep smashes were missing their mark. Ultimately, it seemed 35-year-old Gade could not cope with the pace as the match progressed and Jorgensen won the deciding game quite easily.

On his Facebook page, Gade’s made the following statement: “Well, tonight at Stade De Coubertin was the time and place for ending my tournament career in the world of badminton…I could think of no better place to do this, and even though I lost my match against my compatriot, Jan Jørgensen 21-18 17-21 15-21, I enjoyed every second on court. Of course I’ve had many feelings go through my mind before and after the match but I feel good about ending this way. It would have been nice to win the match today and actually I had chance to do so, but in the end, what mattered to me was to say goodbye in a good way and I did.”

Meanwhile, Viktor Axelsen, who many see as the likeliest Danish successor to Peter Gade, made the semi-finals by beating eighth seed Wang Zhengming of China, 21-7 13-21 21-15. He will battle Kenichi Tago (Japan, 5) for a place in the Men’s Singles final, while the other half pits Jorgensen against Daren Liew (Malaysia). Liew beat Sho Sasaki (Japan) for the second straight time. last week, Schenk powered past the upcoming Chinese player Chen Xiao Jia 21-10 21-14, and will take on top seed Saina Nehwal in a replay of last weekend’s Denmark Open final. Nehwal was pushed to the wall by seventh seed Ratchanok Intanon (Thailand) in her quarter-final, but closed it out in straight games 22-20 22-20.

The lower half of the draw saw the upset of third seed Tine Baun. The Danish veteran, who is close to retirement, was outplayed 21-7 21-18 by Minatsu Mitani of Japan (right). The other semi-final will therefore be an all-Japanese affair as Mitani opposes senior compatriot Eriko Hirose. The latter prevailed 21-15 21-18 over Tsz Ka Chan of Hong Kong.