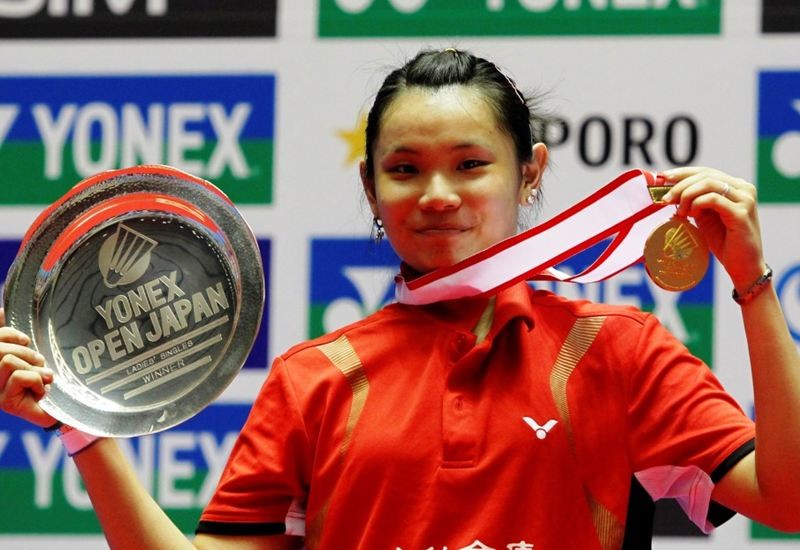 The Yonex Japan Open 2012 might just have heralded the arrival of a new talent – Women’s Singles champion, Tai Tzu Ying.

Her title victory today was infused with sublime skill, precision and power; a performance hinting it may well be the first of many Superseries titles for the Chinese Taipei teenager. Tai’s defeat of local hope Eriko Hirose was the highlight of the final day of the Japan Open. In the first match of the day, top seeds Chan Peng Soon and Goh Liu Ying (at left) set a new landmark for Malaysia, winning their country’s first-ever Superseries title in Mixed Doubles. Chan/Goh survived a late charge by Muhammad Rijal/Lilyana Natsir (Indonesia, 5) to win 21-12 21-19. While there was plenty of exciting action in all the matches, it was Tai Tzu Ying who produced a riveting display for fans. The 18-year-old was in just her second Superseries final but left no doubt she has it in her to excel under pressure. Hirose ran away with the first game as her serves, dispatched high and deep, had Tai constantly in a flutter at the back court.

However, with the change of ends for the second game, fortunes shifted dramatically. It was Hirose’s turn to feel the heat as Tai took 12 of the next 13 points. She had begun to assert herself – hitting with venom, tricking Hirose with her unpredictable sliced drops and even punching the odd backhand winner. After an easy second game win, Tai continued to pile on the pressure, forcing Hirose to run back and forth as she created all the openings with her delicate touch at the net and her variety of strokes. On a couple occasions she left Hirose stranded with the power of her backhand shots, and she seemed headed for an easy win at 14-9.

Hirose, to her credit, refused to give in, and fought every inch of the way. However, Tai was equal to the task, nailing her title with a flick to Hirose’s backhand corner and raising her arms in triumph.

“It’s my first title in the Superseries, so I’m really happy about it,” said Tai. “She (Hirose) was too good in the first game, but I played better in the rest. I was able to win because I took the lead first in the final game. I was able to play without any pressure. That’s why I won.” Earlier, Lee Chong Wei, seeking his first Superseries title since his home Malaysia Open in January, was in control for most of the match against Boonsak Ponsana. The Thai did trouble the Malaysian in patches, but that was when Lee seemed to have grown complacent, and the top seed shifted gears when it mattered.

Ponsana is a fine player at the net, and he did catch the top seed whenever he drew him forward early on. From 17-all, Lee (right) raised his level and took it 21-18. In the second game, the London Olympics silver medallist kept ahead throughout. Eventually, the best rally of the match came on his fourth match point – Ponsana made two stunning retrievals behind his back, before finally smashing wide to give the Malaysian his third Japan Open title.

“It was really a good match, but it was tough,” said Lee Chong Wei. “This is my first tournament after the London Olympics. I’m very happy to start with this victory. I can put my disappointment of the Olympics behind me.”