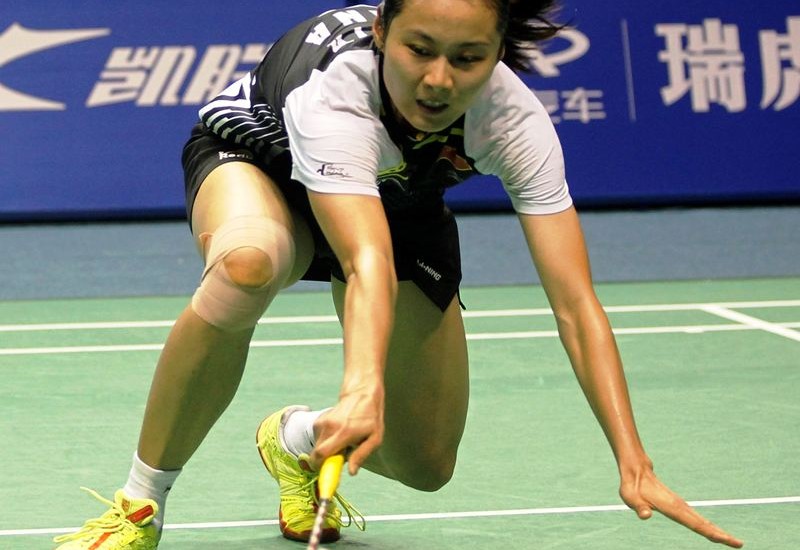 China won all five titles at their home Li-Ning China Masters today – replicating their sweep of the Olympic Games.

Top seeds Chen Long and Wang Yihan asserted their class by winning the Men’s and Women’s Singles respectively. In fact, except in Men’s Doubles, the other four titles went the way of the top seeds. Non-regular pair, Chai Biao and Zhang Nan, were comfortable winners over No. 1 seeds Hiroyuki Endo/Kenichi Hayakawa in the Men’s Doubles final, to cap another glorious finals day for China. Earlier, Bao Yixin/Zhong Qianxin (Women’s Doubles) and Xu Chen/Ma Jin (Mixed Doubles) kept the home team in sight of the whitewash.

While world No. 3 Chen Long (pictured right) was too fast and powerful for Hu Yun of Hong Kong, Wang Yihan’s opponent Jiang Yanjiao fought tenaciously before the top seed summoned something special to win her second Superseries title of the year, after the Malaysia Open in January. The absorbing affair pitted the left-handed Jiang’s deceptiveness against her compatriot, the lanky world No. 1. It was a neck-and-neck battle all the way. Wang’s destructive steep hits were matched by the trickery of Jiang’s slices and net play, and points were close all the way. Jiang appeared to have the advantage when Wang made a weak backhand into the net to give her a 18-16 lead, but the error seemed to spur on the top seed instead of deflating her. She reeled off five points in succession to leave Jiang dispirited.

The top seed continued in the same vein in the second game, going up 5-1 – she had won ten of the previous eleven points. Jiang stemmed the slide, and the battle became intense contest – each player firing what seemed a winner, only to have it returned by the other. After 11-10, Wang played two astonishing returns to Jiang, and that effectively killed the contest, for Wang stepped on the pedal and Jiang had no more answers. The top seed emerged triumphant 21-18 21-14.

Hu Yun was outmatched by Chen Long. The Chinese set a fast pace from the beginning, leaving Hu behind. His skill at the net did earn him some pretty points but overall Chen had too many weapons which he could not counter.

The first game was over in quick time, 21-11. In the early part of the second, Hu Yun showed greater resolve to stay in the rallies, and went ahead 7-6. However, he was too inconsistent, and Chen steadily increased the lead to emerge a comfortable victor, 21-11 21-13. The first match of the day saw the new combination of Cheng Shu/Luo Yu take on the blossoming pair of Zhong Qianxin/Bao Yixin. The top seeds, who won the Singapore Open Superseries in June, gave their opponents no chance, for both Zhong and Bao played percentage badminton to shut Cheng/Luo out of the contest 21-12 21-15. Zhong patrolled the backcourt effectively, while Bao used her height to cut off all the returns at the net.

All that remained for the Chinese sweep was for Chai Biao/Zhang Nan (pictured left) to beat Hiroyuki Endo/Kenichi Hayakawa of Japan. This they did in just 39 minutes, even though they are not regular partners. From 6-all in the first game, they went ahead and were never caught. The second game was tighter, with the Japanese going ahead 15-13, but the Chinese took the next six points and secured the sweep with a 21-18 21-17 victory.